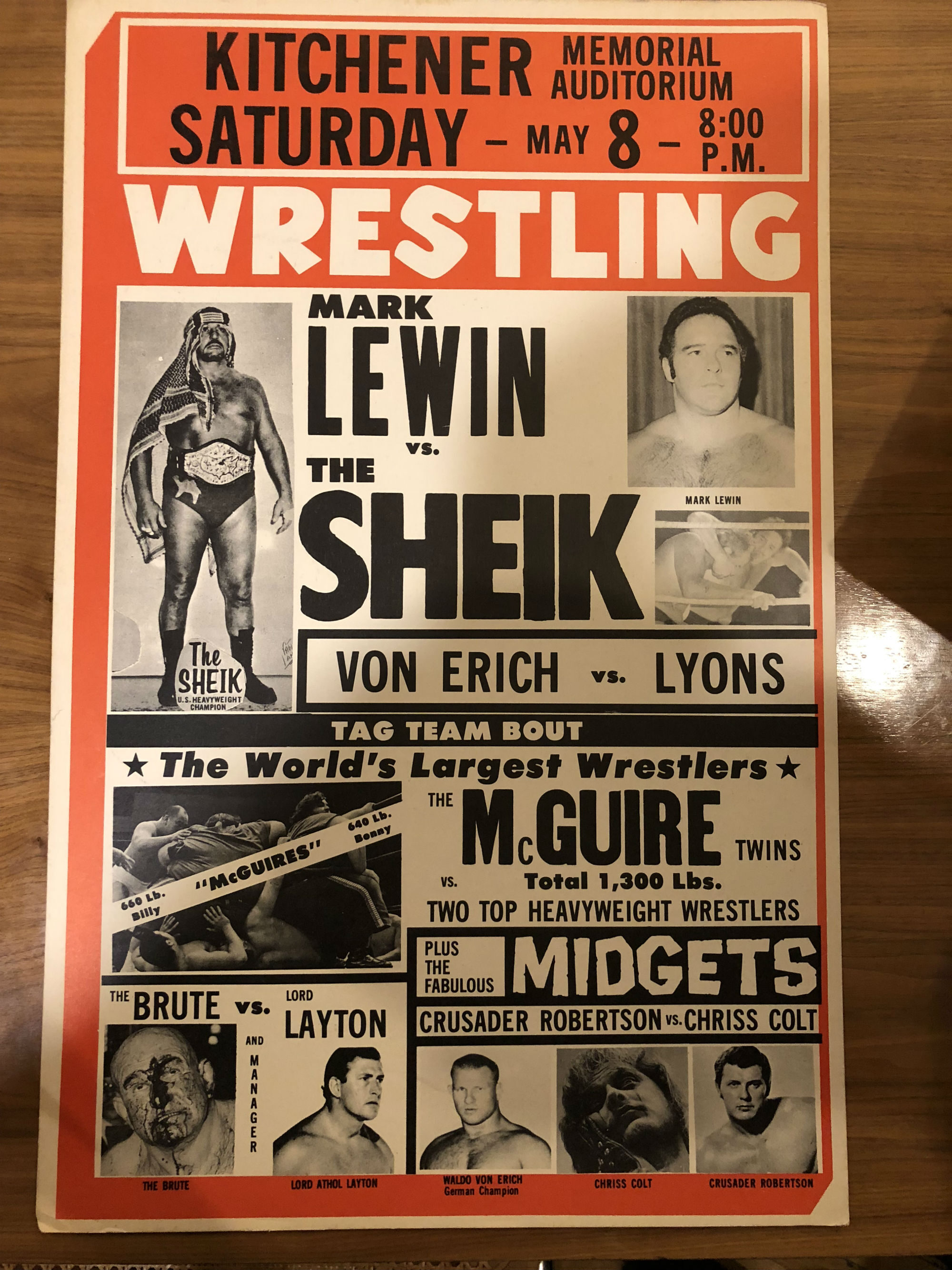 My Forever Treasures wrestling fan clients have ached for vintage professional wrestling treasures. Today, we’ll celebrate this sport, that’s not really a sport. Professional wrestling’s egotistical gladiators are never who they appear to be. They’ve all been created, solely for your ENTERTAINMENT! Their feuds and grudges are choreographed. The public is offered nothing honest. The McMahon family, even dictates the predetermined FINAL MATCH RESULTS! Yet, the American public is overwhelmingly entertained by Professional Wrestling. Last year, this entertainment/sport turned a $215 Million profit! Our vintage treasures await you. 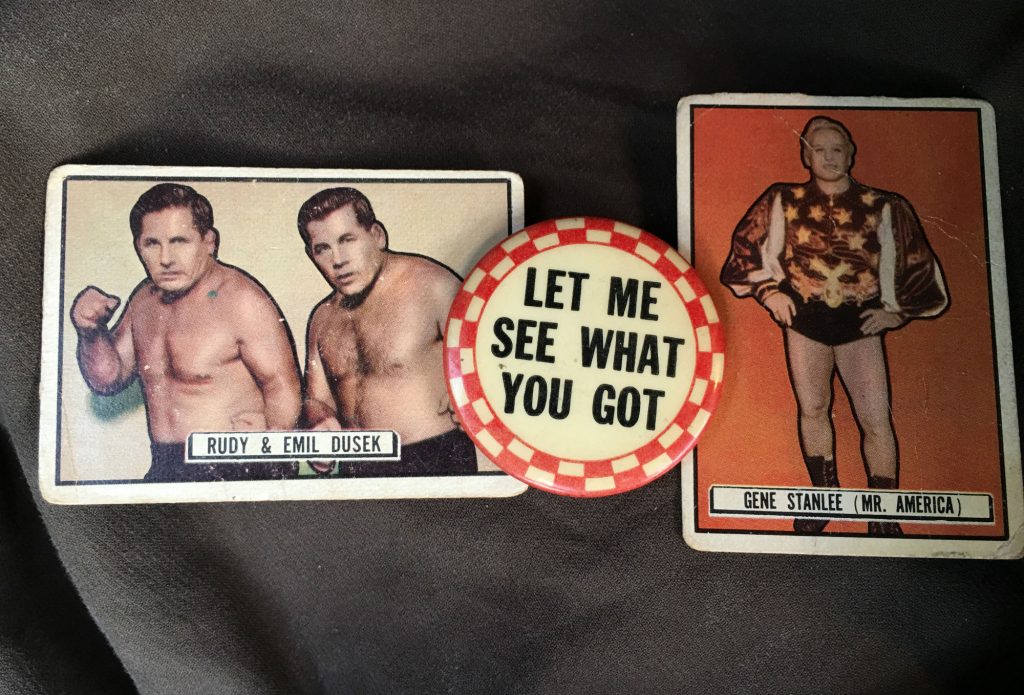 Our rare “2nd Golden Era” combo wrestling treasures, include “The Sheik” Vintage Wrestling Poster. He’s headlining a multi-match classic. If you believe your eyes, This Bad Guy U.S. Heavyweight Champion bit, clawed & bled his way to the TOP! Everything appealed to fans who COULDN’T be Offended! This card featured the Wrestling McGuire Twins. Guinness said “They’re the Largest at 1,300 pounds.” The card also offered The Fabulous Midgets. They don’t give names, so they’ve chosen both a female match between “Little Tokyo” & “Tiny Dancer” & males “Short Sleeve” vs. “Sky Low Low.”

The Wrestling Card Poster includes, a match with The German Champion Von Erich. If you pay attention, you’ll notice EVERY Pro Wrestler is some fraudulent kind of CHAMPION! A Bonus. “The Brute’s” Passport Photo appears on this classic piece. We’re happy to include these two 1951 Topps Ringside Trading Cards. Rudy & Emil Dusek (The Dusek Bros.), who wrestled as “The Riot Squad.” *Haven’t we all! Plus, Gene Stanley legendary icon who called himself “Mr. America.” All who followed, owe a lot to the flamboyant, egotistical, vain, self centered style of “Gorgeous George” and “Mr. America” Gene Stanley.” Amen.

I wrestled professionally as “One Carat Stud,” and was pals with the “Big Boss Man. I know the Professional Wrestling GOSPEL! I’m your pal. Today, My Forever Treasures parts with pieces of our Wrestling Cache. The Poster & Wrestling Cards, have us including a 1930’s “Show Me What You’ve Got” Pinback. This, will add “ATTITUDE” to your treasure. Please offer the combination as “VINTAGE EYE CANDY.” We Do! 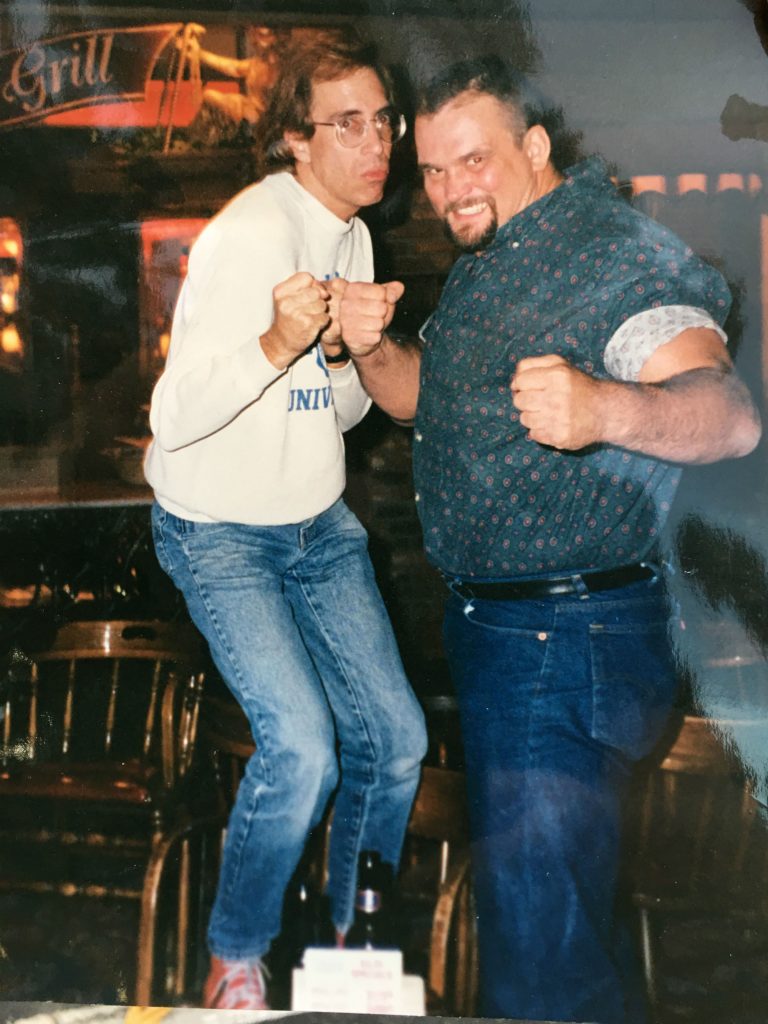 Professional Wrestling The “One Carat Stud” vs The “Big Boss Man”