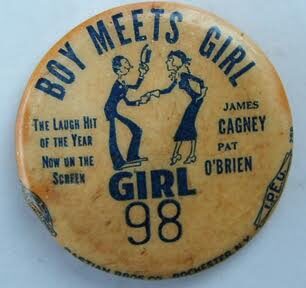 James Cagney and Pat O’Brien give Hollywood an affectionate chuck under the chin (and a comic kick in the butt) in this film making spoof based on the same-titled 669-performance Broadway hit by Bella and Samuel Spewack (My Favorite Wife, Kiss Me, Kate) and zestfully directed by Lloyd Bacon (42nd Street).

In roles based on colorful screenwriters Ben Hecht and Charles MacArthur, Cagney and O’Brien fling words around like hot potatoes as they invent boy-meets-girl story lines to please a fading cowboy star (Dick Foran) and a huffy producer (Ralph Bellamy).

Their latest idea has a new wrinkle – revenge against the cowboy and the exec. And the madcap way they pull it off places Boy Meets Girl alongside such deft 1930’s jabs at Tinseltown as Once in a Lifetime and Bombshell.

Joining the fun in the role of a beleaguered movie premiere emcee is Ronald Reagan. Cagney and O’Brien’s deception and scheming, get them fired and re-hired enough times, to turn out a successful script. Great energy and zany laughs, are this film’s trademarks.