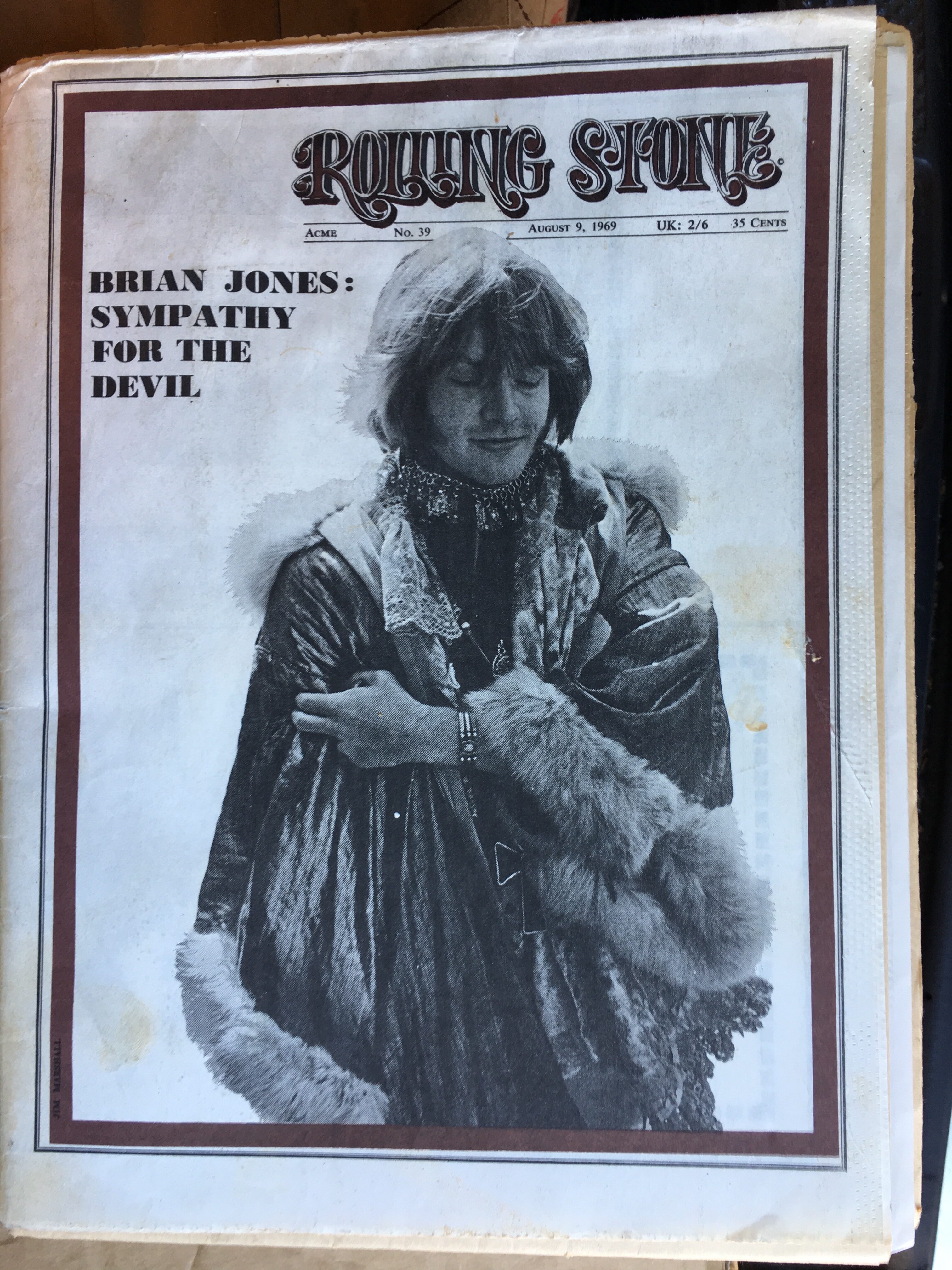 My Forever Treasures opens our vintage Rolling Stones Rock and Roll Icon Eye Candy Vault. Pleased to offer our only Brian Jones Treasure. The Brian Jones passing as documented in the August 9, 1969 Rolling Stones Magazine Cover Story remains one of Rock and Roll’s most historic tragedies. He was an English musician, best known as founder and the original leader of The Rolling Stones. Initially a slide guitarist, Jones would go on to play a wide variety of instruments on Rolling Stones recordings and in concerts.

He was prolific as a rhythm and lead guitar player, also excelled at various keyboard instruments such as piano and organ, marimba, harmonica, sitar, wind instruments such as recorder, saxophone, oboe and numerous others. His aptitude for playing a variety of instruments is evident on the albums “Aftermath” (1966) “Between The Buttons”(1967) and “Their Satanic Majesties Request” (1967).Brian played harmonica on “Not Fade Away” (1964), sitar on “Painted Black” recorder on “Ruby Tuesday” and marimba on “Under My Thumb.”

On May 2, 1962 Jones placed an advertisement in Soho’s Jazz News, inviting musicians to audition for his new R. & B. group. Pianist Ian Stewart was the first to respond. Later Mick Jagger joined the band. Mick brought boyhood friend Keith Richards to rehearsals & he joined the band as well. Bill Wyman was chosen as their bass player because he had a spare guitar amplifier & always had cigarettes as well as his own bass, which he built himself. In January 1963, they finally persuaded Charlie Watts one of London’s better drummers to join the group.

It was during this early period, Brian and Keith developed a style called “guitar weaving,” where both guitars would play both rhythm and lead guitar with no boundaries to create the effect of sounding like 4 or 5. Once Brian was out of the group, Keith and the new guitar members used this style as the Rolling Stones TRADEMARK. Andrew Loog Oldham’s arrival as the group’s manager, marked the beginning of Jones’ slow estrangement.

Oldham recognized the financial advantages of band members writing their own songs. Jagger and Richards would prove to be among rock’s greatest song writers. Brian Jones wasn’t a song writer. The music moved away from Brian’s beloved R. & B. to the Jagger & Richards classic rock. He had lost all influence and flamboyant Mick Jagger became the group’s superstar. The toll from days on the road, the money and fame and feeling of being alienated from the group resulted in excessive alcohol & drug use that often left Brian unable to perform or record.

Prominent on all 14 of the Rolling Stones albums, from 1964-1967’s “Between the Buttons” Brian spiraled so out of control he was dismissed from the group he created in June 1969 as they were about to do a U.S. tour without him. Mick Taylor replaced him on guitar. Less than a month later, Jones was found drowned in the swimming pool on his estate.

Bill Wyman said “Brian formed the band.” “He chose the members. He named the band The Rolling Stones.” “He chose the music they played.He managed them. He got them gigs.” “Brian was very influential. very important, and then slowly lost it – and just kind of wasted it and blew it all away.”

Brian Jones Rolling Stone Magazine Issue August 9, 1969, framed on your wall will have everyone who sees it going Wow-I-said-Wow! Buy this for you. Pamper yourself. Be our guest.

What happened to BRIAN JONES?