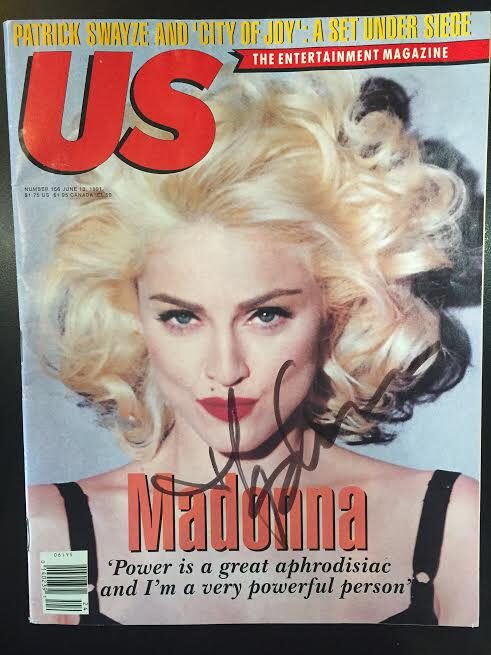 Madonna is an American singer, songwriter, dancer, actress, author, entrepreneur, philanthropist.  She gained popularity, by pushing the limits of lyrical content, in mainstream popular music. Her 300 million record sales, have her referred to as “The Queen of Pop.”  Madonna’s $1 billion touring gross, is the highest of any female artist, in history.

She has written and produced many of her Grammy Award Winning Songs. Among her # 1 hit songs are, “Like A Virgin, “Into the Groove,” “Frozen,” Like A Prayer,” and “Vogue.”  Madonna’s power and control, is unprecedented in the music industry.  All her tours, are events.  While on her, “Blond Ambition Tour,” she signed this magazine cover.

Madonna has successfully made her mark in motion pictures. She received a Golden Globe, for her starring role, in “Evita,” great reviews in “A League of Their Own,” and was touring to promote, “Truth or Dare,” when she appeared on the cover, of this Us Magazine.  She was inducted, into the Rock and Roll Hall of Fame, in her first year of eligibility.

This rare Madonna, autographed Us Magazine Cover(June 1991) when framed on your wall = Icon Eye Candy At It’s Best. This treasure, is the only one, from our “Truth or Dare” Collection.