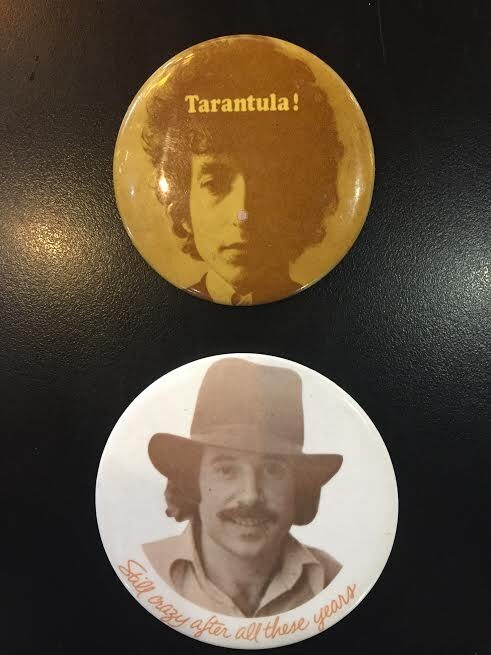 My Forever Treasures is beaming, as we offer rare pinback memories, from the careers of Bob Dylan and Paul Simon. Both are considered, American Songwriting Royalty.  Bob and Paul are multiple Grammy winners, idolized for decades.

Our first treasure, is a 1970 Bob Dylan “Tarantula” promotional pinback. “Tarantula” was Bob Dylan’s first book. The pinback is 2 1/2″ and especially rare, as the publisher barely promoted the book. Dylan’s trademark, is his ability, to raise the standard of excellence, for lyrical music. “Like A Rolling Stone,” has critics and fans celebrating Bob Dylan, as America’s greatest musical poet.  He had no intention or ever signed, to write this book. His manager, accepted the publisher’s offer, without Bob’s consent. The demand, didn’t sit well = at all!!

“Tarantula” has Bob Dylan, writing in a streaming subconsciousness style, often appearing to be experimental prose.  He uses a systematic derangement of the senses.The 143 pages, are characterized by an irrational arrangement of material. It’s Dylan’s version of Anti-Art ! The most quoted thought, has Bob Dylan offer, “Now is not the time to get silly.” “Put on your clown’s boots and jump on the garbage.”  Most literary reviewers said, “Buy his music instead.”  Only one critic gave “Tarantula” a rave review. He said, “Perhaps, we should be praising Bob Dylan, for his cryptic brilliance.” This rare 2 1/2″ “Tarantula” 1970 pinback, will serve as proof, you’ve been there and done that.

Paul Simon’s song “Still Crazy After All These Years” 1975  promotional pinback. (large 3″ rare+)  Comes from his fourth solo album by the same name.  “Still Crazy…” offers Paul’s soft reflection, on middle age. It went to # 1, and earned him a Grammy for Best Male Vocal. One of music’s most prolific songwriters,  his “50 Ways To Leave Your Lover,” from the same album, also went to # 1.  In 1968, Paul Simon and his singing partner Art Garfunkel became an instant sensation. Simon’s song “Sounds of Silence,” went straight to  # 1.  He wrote hit after hit. Among them “Mrs. Robinson,” from the film, “The Graduate”   and culminating with “Bridge Over Troubled Water,” on his 1970 final album with Art. Paul Simon won 3 Grammy Awards for that brilliant song. A Grammy for Best Album, Best Song and Best Record for his duet with Art.

His songwriting  and solo singing career, continued, long after Art Garfunkel.  Last count, had him at 5 albums as a duo, and 18 solo albums. One of the best contemporary songwriters, of all time, this vintage large 3″ “Still Crazy After All These Years” pinback is proof, 5 years after Art, he’d always write # 1 hit songs. Paul Simon’s 1986, “Graceland” won a Grammy, for Best Album of the Year. He’s in the Rock and Roll Hall of Fame twice. Once as a duo. And a second time, as a solo artist !!

It is so rare, we can offer 2 treasures from our “icon’s icon”  treasure chest. Bob Dylan and Paul Simon, are two of the best. All the others, are the best of the rest. Both, the 2 1/2″ Bob Dylan “Tarantula” 1970 pinback, & Paul Simon’s 3″ “Still Crazy After All these Years” 1975 pinback  should be framed on your wall. Offer these treasures as, “ICON EYE CANDY.”

Paul Simon – Still Crazy After All These Years