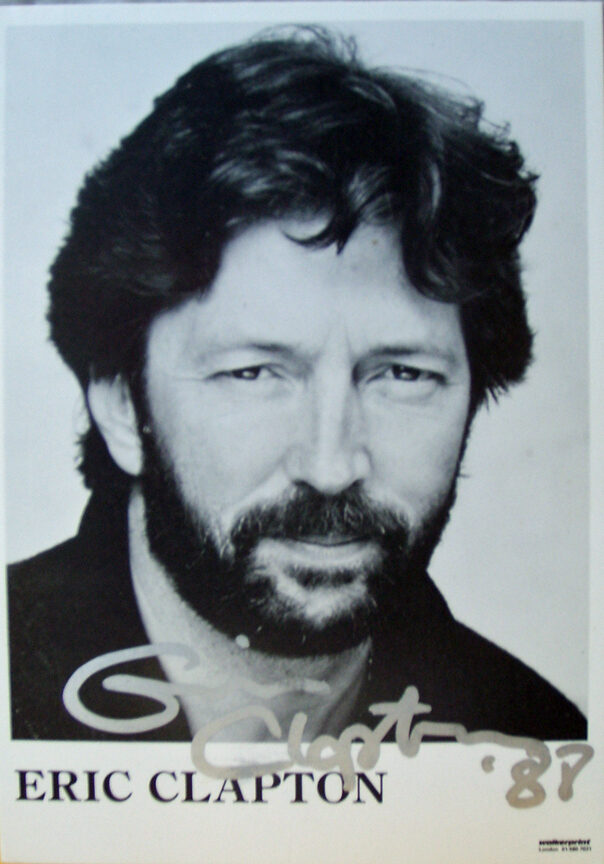 Eric Clapton, is an English, rock and blues guitarist, singer & songwriter. He is the only 3 time inductee, into The Rock and Roll Hall of Fame. Once as a soloist, and as a member of the bands “The Yardbirds,” and “Cream” as well. Eric has been referred to as, one of the most important and influential guitarists of all time ! His version of “I Shot The Sheriff,” helped reggae reach a mass market. After leaving the “Yardbirds,” he formed super groups “Cream” and “Blind Faith.” Clapton departed “The Yardbirds,” the day “Heart of Stone” became a hit song.  He claimed, “he was interested in the “blues,” not commercial success.”

In “Cream,” he developed his singing, songwriting and guitar playing. He would achieve the commercial success, he never wanted. “Cream,” had worldwide hit songs “White Room,” “Crossroads,” and “Sunshine of Your Love.” Clapton was uncomfortable, being called, “The greatest guitar player in the world.” He couldn’t bare to have people say, “Eric Clapton Is God.”  The public decided, Eric Clapton’s reputation, as a guitar legend, would reach new heights ! Always breaking new ground. His hit song “Layla,” with “Derek and the Dominoes” was a worldwide hit. His solo, “Change The World,” was named Song of the Year, and earned Eric, 1 of his 18 Grammy Awards.

After the tragic death, of his 4 year old son, Eric wrote the song “Tears In Heaven.” This song and his “Unplugged” Album, had Eric winning 6 Grammy Awards. With 10 Million Albums sold, it became his best seller. Always in demand, to play with everyone. He has done exactly that. Clapton, played the guitar solo, on George Harrison’s “While My Guitar Gently Weeps.” Guest appearances, with the Rolling Stones, George Harrison, and Bob Dylan to name a few. Even a 47th Anniversary Show with “Cream.” He has played, The Royal Albert Hall 200 times. Clapton has toured the world, for decades.

Eric claims, his days of touring are over. At this point, he finds the road unbearable. He still records, and has performed benefits, for endless causes. Once a desperate alcoholic, but completely recovered. Eric Clapton said, “At his worst, the reason he didn’t commit suicide, is because, it meant, I wouldn’t be able to have another drink.”  As a result, we still have the greatest guitar player, in the world. Amen.

My Forever Treasures, is especially pleased to offer, this beautiful Eric Clapton autographed photo. Framed on your wall, it will serve as Musical Icon Eye Candy. This item, comes with an “I love it.” Guarantee !!  Pamper yourself. You deserve IT !! (contact us.)