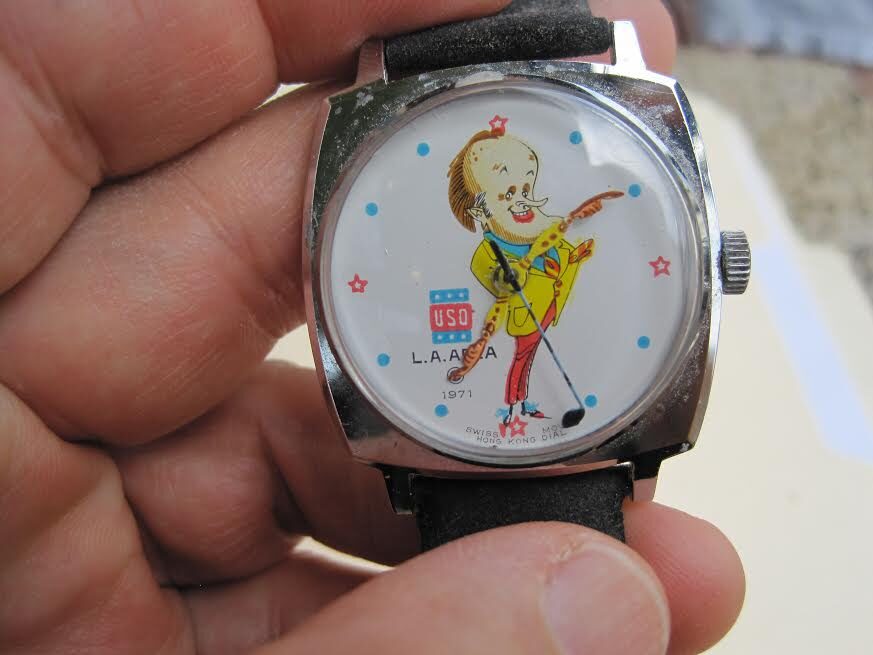 Here is an opportunity, to wear a vintage Bob Hope museum piece. As rare, as it is timely. This Bob Hope, 1971 U.S.O. wrist watch, offers a moving golf club, for a second hand. Bob’s arms, are the minute and hour hands. The watch’s face, has a signature caricature of Bob Hope. Although, he was a mediocre golfer. This treasure, keeps perfect time !

Charlie Chaplin and Bob Hope, both born in Great Britain, became America’s most celebrated comedians. Chaplin, in films. Bob Hope, in films, radio, television and personal appearances. He even hosted, 19 Academy Award Shows. An accomplished actor, singer, comedian, dancer, and author of 14 books. Bob Hope, will be most remembered, for entertaining U.S Armed Forces from 1941, for almost 50 years.

He brought his show, of celebrities and beautiful women, to every corner of the globe. Happy to entertain U.S. troops, in harm’s way. Often a heartbeat, from enemy attack. His show went to Vietnam, for 8 years. Bob’s U.S.O. Armed Forces, Christmas shows were televised. He won several Emmy Awards, for these popular events.  His 6 decades entertaining audiences, made him a legend. Bob Hope found, putting a smile, on a war time soldier’s face, the most satisfying.

Bob was awarded The Presidential Medal of Freedom. He is forever, an icon’s icon. Award Yourself, with this self winding, “Thanks For The Memories” Masterpiece. And it works !!

The Secret Life Of Bob Hope