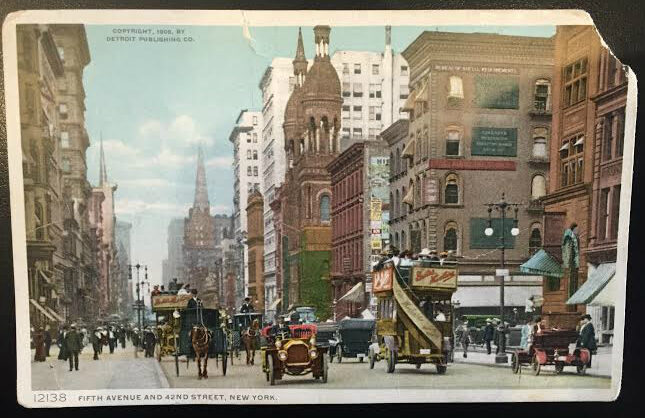 In 1899, the first documented mailed postcard was delivered. By 1902, the photo postcard was perfected. The photo was printed on postcard stock, with the postcard information on the back. Only the address and stamp, were allowed on the back. Your message, had to be on the front, over the image. In 1907, the law was changed.  The address and stamp were still on the back. Now you, also could write on the back as well. The image on the front, finally was unmarked. Postcards became, a favorite choice,  for communication. The Detroit Pub. Co. was # 1.

In a good year, Detroit Pub. Co. printed some 7 million images. Photochroms ,  are the earliest European examples of commercially viable color photography. The black & white photograph, needs a coloring process. Detroit Pub. Co. created, their own brand name for the process. They called the Photochroms, their copywritten “Photostints.” This company has thrived, since the turn of the 20th century.

My Forever Treasures, is offering a 1908 Detroit Pub. Co. Classic. “Fifth Ave. and 42nd Street.” New York. This company’s trademark, was the ability to offer spectacular images, from a place, where Time has Not Passed. The Detroit Pub. Co. focused on an idealized America.  The people, clothes, cars, horse drawn carriages, buildings and especially the colors jump out at you. You are whisked away, to 1908.

Postcard collecting, has endless fans. Christmas Cards, Birthday, Historical, and the list would never end. We’re pleased, to offer one of my favorites. Detroit Pub. Co.’s 1908 Photo Classic of New York City. This will be gone, in a heartbeat. Framed on your wall, will have your guest’s hearts, skip a beat. It’s one of our best !!