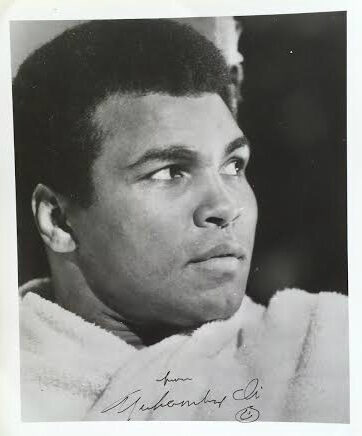 Muhammad Ali, is a legend for his skills inside the boxing ring. He’s even more admired, for his values outside the ring. Ali has spent his life, as a champion for religious freedom, racial justice and the triumph of principles over expedience. Ali’s philanthropy towards education continues, to make a huge difference. He is genuinely, the “people’s champion.”

Muhammad Ali has been named, The Greatest Athlete of the Last Century. Worldwide, he’s also been named The Most Popular Athlete of the Last Century. The most charismatic boxer, and by his own admission, also “The Prettiest of All Time.” Ali won a Light Heavyweight Gold Medal, in the 1960 Olympics. Now he’s in the Boxing Hall of Fame and has beaten 7 other heavyweights, who are also in the Hall of Fame.

In 1964, Cassius Clay  was 19-0, when as a 7-1 underdog, he defeated champion Sonny Liston for the crown. In their 2nd fight, Clay stopped Liston in the 1st round, to defend his Heavyweight Championship Title. After those fights, Cassius converted to Islam, and changed his name to Muhammad Ali. In his prime, years later, his religious beliefs would have him stripped of his crown. This decision, was ultimately overturned by the Supreme Court.

Ring Magazine named Muhammad Ali, “Fighter of the Year,” 7 times. He defeated every top heavyweight fighter of his era.  Ali fought during, what was known as the Golden Age of Heavyweight Boxing. His bouts became worldwide events. Ali-Frazier fought in the “Fight of the Century,” and the “Thrilla in Manila.” Ali-Foreman in Zaire, was “The Rumble in the Jungle.”  Ali was extremely fast inside the ring.  Always happy to glorify his ability, he’d taunt opponents by bragging, “Their hands can’t hit what their eyes can’t see !” Muhammad Ali is the only boxer, to be a 3 time lineal Heavyweight Champion. In 1964, 1974 and 1978.

An adored champion and the ultimate showman, because he was the king of “trash talking.”  The public will always love this man, for ridiculing his opponents and praising himself. He claimed Sonny Liston looked like a bear. As Cassius Clay, he said, “after I beat Sonny Liston, I’m going to donate him, to the zoo.” One opponent, was an ugly little man, and another = a bum. Joe Frazier was, the “Gorilla” he’d beat, at their Thrilla in Manila.  As a 7-1 underdog, he knocked out George Foreman for the Heavyweight Crown. This had Muhammad Ali declare, “I just shocked the world. I must be the greatest of all time !”

At My Forever Treasures, we love the “Champ,” as well. It is our pleasure, to offer this special treasure. A hand signed 8 x 10 photo of Muhammad Ali, and he’s inscribed it, “After me, there will never be another.”  Certainly, never another, who will, “Float like a butterfly, and sting like a bee.” It’s Rare, Muhammad Ali Magic Time. Pamper yourself.