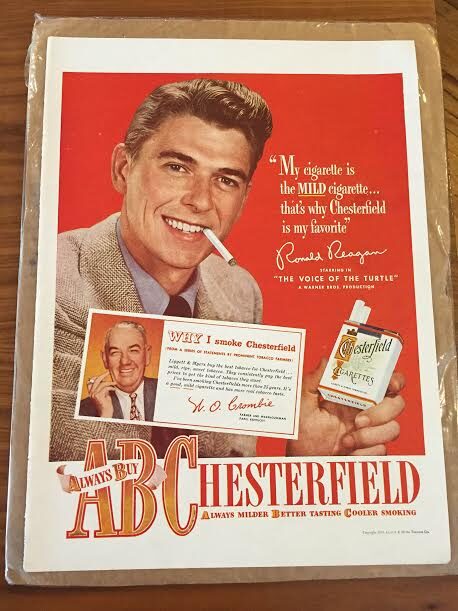 Many years before, he became President of the U.S., Ronald Reagan was a model for Liggett and Myers Tobacco Company. Chesterfield Cigarettes, were one of their most popular brands. Reagan was a model for the tobacco industry in the 1930’s. As a well known Hollywood actor, he was ideal for this 1948 Chesterfield advertisement.  With a smile on his face, and a cigarette in his mouth, Ronald Reagan offers, “I like Chesterfield Cigarettes best, because = the tobacco is so smooth !”  In the U.S., cigarette ads have been banned for decades.

This colorful, 10.5″ x 14″ Ronald Reagan Chesterfield Cigarette Advertisement,  is a vintage surprise  from 1948.  Bob Hope and Bing Crosby, also were popular in tobacco ads. But, former President Ronald Reagan’s cigarette advertisements are the most desired. Framed on your wall, this treasure comes with a “put a smile on your face” Guarantee.