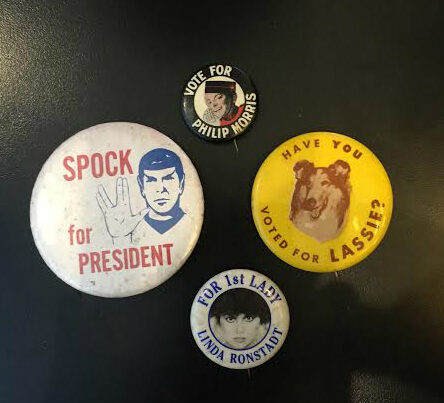 During this election year, My Forever Treasures, is beaming, as we offer pinbacks of 4 vintage unsuccessful candidates 1940-1980.  Vote For Phillip Morris was a 1940 mistake. As popular as cigarettes were in the 1940’s, the public rejected the notion, of voting for the entire company to the Presidency.  The classic Phillip Morris Bellhop, encourages “Vote for Phillip Morris.”  Our guess is, they were running for the Delusional Political Party.  A k.o. 1″ msitake.

The second unsuccessful candidate, is the 1950’s, “Have You Voted For Lassie” pinbsck.  This 1950’s television star, was hoping to be, the first dog elected to the Presidency.  An overwhelming mistake, as Lassie appealed to voters, much too young to vote. A favorite of child voters. = and there’s no such thing.  1.75″ Beauty. Ideal to wear,  for a disability interview.

1980, “Linda Ronstadt for First Lady.” As popular as Linda was, you can’t run for First Lady. There is no such thing. These are only Presidential Elections. This great 1.25″ pinback, will serve as proof, both Linda and you, didn’t have a clue.  A misguided idea, who’s time has never come. A 1980 Ronstadt winner, although Linda, never had a chance.

Finally, our 1960’s “Spock for President,” Pinback.  Star Trek collectors, make this 2..25″ favorite especially rare. In the loser’s circle, this Spock treasure is revered. Several reasons, for Spock’s unsuccessful Presidential campaign, included his ears, lack of emotion, not a U.S. citizen, and appealed primarily to the Milky Way Vote.  Millions of voters love him, but not as president. Date that forever.

In this election year, all 4 of these My Forever Treasures Pinbacks, will put all your friends and family on notice. You are the most “politically incorrect,” of all.  It’s time to flaunt it.