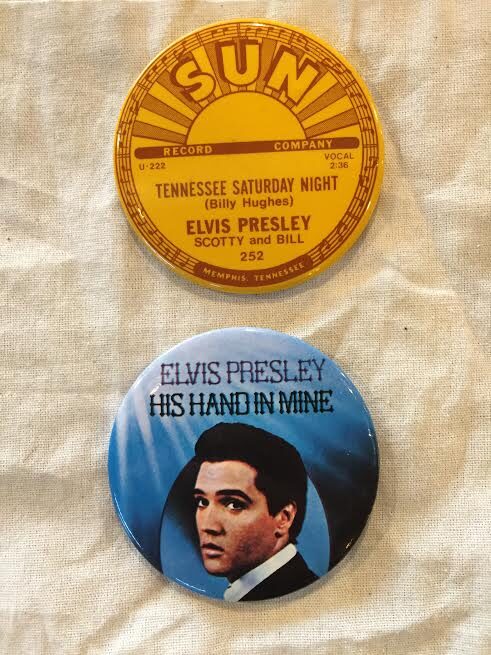 Elvis Presley His Hand In Mine and Sun Record Large Pinbacks

In 1960, Elvis Presley recorded “His Hand In Mine,” his first gospel album. He always loved gospel music. Sometimes, before a show or recording session, Elvis would sing gospel songs, to warm up his voice.  This album was special to Elvis, as he had Boots Randolph on sax and Floyd Cramer on keyboards, join his trio and the Jordanaires.

Only gospel classics were chosen. “His Hand In Mine,” “If We Never Meet Again,” and “In My Father’s House,” are a few of the highlights. The song “Surrender” wasn’t included on the album, but offered as a single. “Surrender” proved to be, Elvis first number 1 hit song of 1961. The gospel genre,  met with great success. It expanded his audience, & there would be more.  Critics praised the kindness in his voice. This gave E.P fans, another reason to love him.

My Forever Treasures, is pleased to offer, this large 3″  “His Hand In Mine,” Promotional Pinback. If you love Elvis Presley and Gospel = This large color close-up, will seal the deal.

In 1954 and 1955, Elvis Presley first recorded for Sun Records.  5 songs were released, with Scotty and Bob backing him up. Elvis played rhythm guitar and sang.  They recorded many songs, but Sun Records never released them. They did retain the songs anyway. “That’s Alright Mamma,” proved to be the most successful.  This was the song, which started everything for Elvis.  “That’s Alright Mamma,” caught Colonel Parker’s attention.

The Colonel took Elvis Presley’s Sun recordings to R.C.A. They paid Sun Records $40,000 for the 5 released songs, and all the other material Elvis recorded at Sun. R.C.A. now owned all of Elvis Presley’s earliest recordings. “Tennessee Saturday Night,” was one of the best unreleased songs, from his Sun Sessions.  Although this song is a country boogie anthem, where Elvis shines, R.C.A. has never released it. They still could. “Tennessee Saturday Night,” was going to  be used on one of his albums or in an Elvis film, but still remains unreleased.