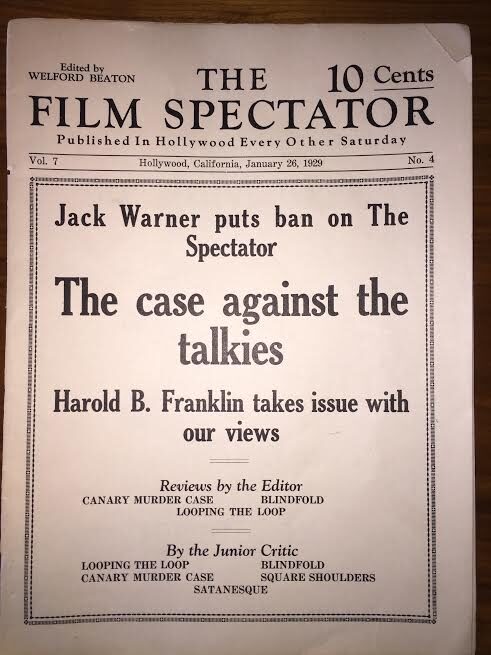 Jack Warner was among the first major Hollywood film producers, to champion sound on film, aka “the talkies.” Certain they were the future for film, he produced 1928’s “Tenderloin.” This was the first feature, where the characters, spoke their own dialogue. Although, only 15 of the 88 minutes were talking, the public was dazzled.

For the previous 15 years, The Silent  Film Industry, had been The Film Spectator’s cash cow. “Talkies”  became a threat to silent film’s survival.  The Film Spectator, had offered headlines about, the public “not wanting to hear voices.” This was spirited by,  the soon to be bankrupt silent film sector. Jack Warner was  producing, “On With The Show,” an all talking, color feature film. Warner’s ban on The Spectator Headlines, demonstrates a powerful film producer, at war with a fading rival.

Framed on your wall, these headlines will serve as vintage eye candy.  A memorial, to the silent film industry’s = last breath. They were about to be, silenced forever.