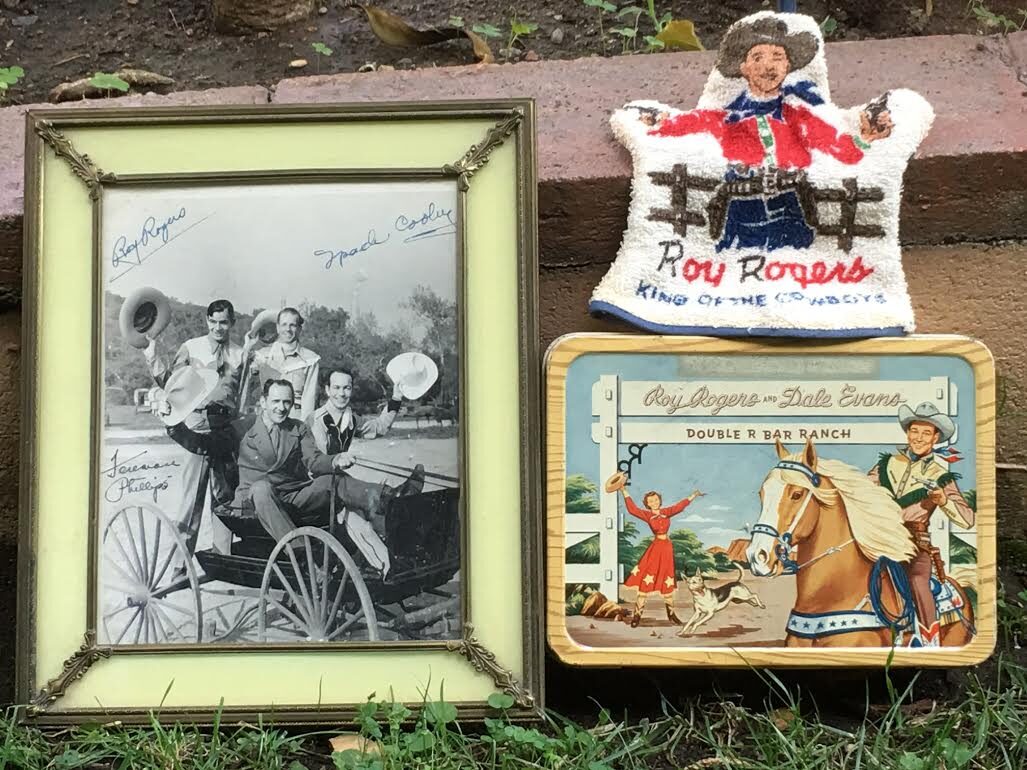 Roy Rogers, was an American singer and actor. One, of the most popular Western Stars, of his era. Known, as “King of the Singing Cowboys,” Roy, appeared in more than 100 films, and numerous radio and television episodes.”The Roy Rogers Show,” was a 1950’s, television favorite. After, winning a 1938 Republic Films, “Singing Cowboy Contest,” he was signed, to a movie contract. Republic, changed his name, from Leonard Slye, to Roy Rogers. His, appearance in their, “Under Western Stars,” created America’s newest matinee idol. “Billy the Kid Returns,” “The Arizona Kid,” and “Young Buffalo Bill,” secured Rogers place, as a top star.

A supporting role, in John Wayne’s classic, 1940’s “Dark Command,” set the stage, for super stardom. The public, loved his palomino “Trigger,” sidekicks Pat Brady, Gabby Hayes and Andy Devine. They, celebrated his movie, back-up group “Sons of the Pioneers,” and the All-American hero, Roy Rogers brought to the screen. With, the songs “Tumbling Tumbleweeds,” “Cool Water,” with the “Pioneers,” and “Happy Trails,” by wife and film co-star, in near 30 films, this “King of the Singing Cowboys,” had classics everyone loved.

With, the money Republic made, from his films and personal appearances, Roy brought a new clause, to his 1940 contract. He’d, own the rights, to his likeness, voice and name, for merchandising. There, would be Roy Rogers action figures, cowboy adventure novels, clothes, play sets, as well as a comic book series. Roy’s, fans loved his pioneer spirit, special brand of American courage and defending things they held dear. Rogers, endless merchandising, met with tremendous success. He ranked 2nd, only to Walt Disney, in souvenir sales and licensing, including 400 merchandise tie-ins. This, was how Roy Rogers, made his $100 million fortune.

Our, vintage “museum quality” Roy Rogers autographed photo, is also signed, by Spade Cooley, the legendary Western Swing fiddler. Spade, toured with the “King of the Singing Cowboys.” His, 1940’s song, “Shame, Shame on You,” was a # 1 country hit. Cooley’s, resemblance to Rogers, had him working, as a film stand-in and stunt double for Roy. Foreman Phillips, also added his signature. Phillips, coined the term, “Western Swing.” This, 1940’s country entrepreneur, booked Roy Rogers, Roy Acuff, Spade Cooley and Bob Wills into the Venice Pier Ballroom, to sold out crowds of 6,000-10,000 people. Roy Rogers, Spade Cooley and Foreman Phillips signing the same photo, offers this as the “Ultimate Country Eye Candy.”

Our “3 in !,” Roy Rogers vintage treasures, will be shared one time. Certain, they’ll end up in a Cowboy Museum. Bill Gates, has us on speed dial. Don’t wait.