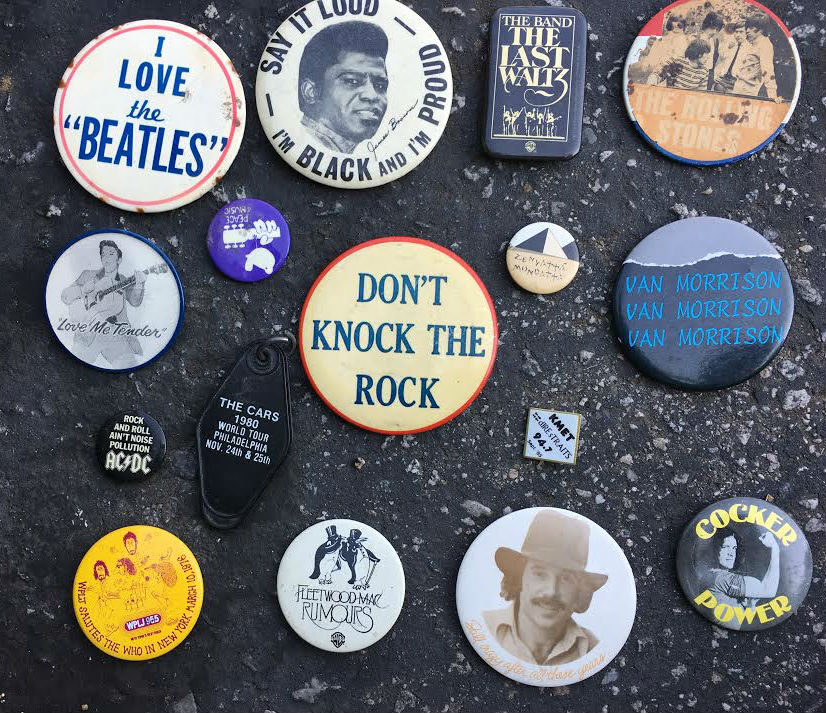 Collecting music pinbacks, offers souvenirs and mementos, that embrace wonderful memories. Our, collections reconnect us to musicians, songs and shows we’ve loved. They’ve, always been a staple for tours, albums and iconic images. (Woodstock ’69.) Among, the most popular are, radio/venue promotions. (WPLJ Salutes The Who in N.Y.C.’76.) Record label classics are winners.(“Rumours,” Fleetwood Mac’77) The incredible success, of our last Pinback Parade, has us celebrating music’s best.

The Beatles, are considered, the best and most important rock band in history. They, embodied the artistic, commercial and spiritual form, at just the right time. Their music, appeared to have the power, to change the world. Our,original’64 large 3″ I Love the “Beatles,” treasure, will have you reliving “Beatlemania.” The R. & R. Hall, welcomed them in 1988. 1989 inductees, The Rolling Stones, have earned the title as “The Greatest Rock and Roll Band of All Time.” 36 charted albums, and their 50 + years together, prove it’s true. The Stones ’64 large 3″ Fan Club Pinback, is a revelation.

Paul Simon’s solo album, “Still Crazy After All These Years,”’75 had him winning best song and male vocal Grammy Awards. The record label, offered this rare large 3′ rarity. A 1990, Hall inductee with Garfunkel, Paul is a rare 2 timer, with Lennon, McCartney, Harrison and Clapton. Van Morrison’s album “Moondance,” is considered a masterpiece. A critics and fan’s favorite, Van, entered in 1993. Our, large 3″ celluloid Pinback, is as rare as Van’s brilliance. With Van, The Who also earned their spot in 1993. Their Rock Opera, “Tommy,” and decades of raising the bar, would have fans happy to own, their “WPLJ Salutes The Who” Pinback ’76.

Rolling Stone, considered The Band’s “The Last Waltz,” the “Greatest Concert Movie of All Time.” Their final performance, featured Dylan, Van Morrison, Neil Young, and icons forever. “The Last Waltz,” Pinback is revered.These,”Music From Big Pink,”masters, were inducted in 1994, with the Grateful Dead. The Grateful Dead, played an eclectic blend of country, psychedelic rock, R. & B., and jazz. Legions, of fans loved their jams, which included “Truckin,” “Mama Tried,” and anything else they played. Our, 1988 concert Pinback, is a chance to say “hello,” to Jerry and the boys.

Fleetwood Mac’s “Rumours,” ’77. A Best Album of the Year Grammy Award winner, is considered a “masterpiece.” 26 million sold, a # 1 hit, “Dreams,” and a lifetime of excellence, had them inducted in 1998. Their W.B. “Rumours” is a Pinback prize. Also included in this collection, are Pinbacks of 2003 R. & R. Hall inductees, The Police and AC/DC.Our bonus round, has treasures, from Dire Straits, The Cars, Joe Cocker and Woodstock.