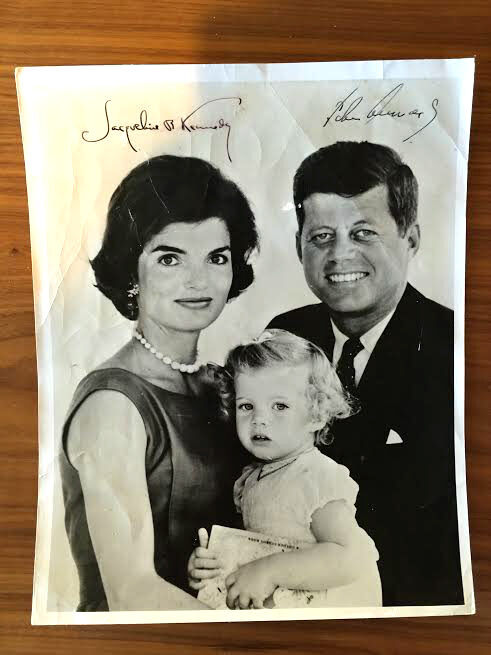 35th President John F. Kennedy and First Lady Jacqueline Kennedy, hand signed photo.  3 year old daughter Caroline, completes the family portrait. In 1960, at 43 years old, J.F.K. was the youngest elected President, in U.S. history. At his inauguration, he echoed “Ask not what your country can do for you. Ask what you can do for your country.”

His youth and inspiration resonated, assuring the nation, they elected a President for the ages. His presidency, would be remembered, for a “New Frontier.” J.F.K. offered federal funding for education, health care for the elderly, and a civil rights movement, that marked an end to racial discrimination. He established the Peace Corps.  A recession was achieved

John F. Kennedy proved to be, the most charming and charismatic President, the United States had ever experienced. He and Jackie, offered a magnetism, the public found irresistible.  First Lady Jacqueline Kennedy, made her mark on fashion, and elevated awareness of the Arts.  Enamored voters, embraced the Kennedy’s version of Camelot.

For the first time, the American people, identified the President, more as a movie star celebrity, than as a politician.  1,000 days after his election, in November 1963, President Kennedy was assassinated. This ended the reign, of America’s most revered leader. Grief stricken to the core. John F. Kennedy, was the only U.S. President, who was celebrated as an iconic hero.  I don’t know that we’ve ever genuinely recovered.

This hand signed, 1960 photo of President John F. Kennedy and First Lady Jacqueline Kennedy,  is the Ultimate Treasure. Bill Gates couldn’t find a nicer one. This incredible item, comes with a “How did you ever get this !!” GUARANTEE ! Date that forever.