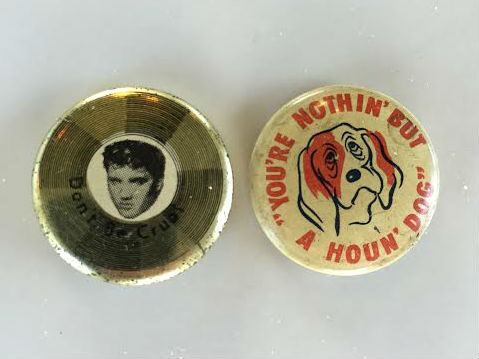 On July 2, 1956, Elvis Presley recorded, both “Don’t Be Cruel” in 28 takes and “Hound Dog” in 31 takes. His input was evident on both. Scotty Moore, Bill Black and D.J. Fontana backed him. Elvis played rhythm guitar and sang. The Jordanaires sang backup vocals . Although Otis Blackwell wrote the song, he gave Elvis co-writing credit and also 50% of the publishing rights. As the song was released on Elvis Presley’s publishing company Hill and Range.

This was the first, of many lucrative deals, Colonel Parker demanded.  Parker guaranteed one million sales, for Elvis recording a song. In return, Elvis Presley would receive co-writing credit and 50% of the publishing rights. This worked out great for everyone on “Don’t Be Cruel.” It sold 4 million copies in 1956, and 6 million, by 1961. Elvis sang the song, on all 3 Ed Sullivan Television performances. Twice in Sept. 1956, and again Jan. 1957.

“Don’t Be Cruel” was the “A” side song, of the dual hit single. “Hound Dog” was the “B” side. “Hound Dog” was written by Lieber and Stoller, who retained their publishing rights. Colonel Parker wasn’t pleased, but they also wrote “Jailhouse Rock” and kept those rights  as well. For the first time in recording history, “Don’t Be Cruel” and “Hound Dog” would  keep replacing each other in the # 1 spot on the charts. Together they were #1 for a record 11 straight weeks.

The R. & R. Hall of Fame has declared, “Hound Dog” one of the songs, that shaped rock and roll. It’s considered, an emblem of the R. & R. Revolution. Elvis Presley sang “Hound Dog” on television, without his guitar. When he gyrated his pelvis towards the audience, and sang, “You Ain’t No Friend Of Mine,”  America declared Elvis Presley, it’s newest SENSATION.

My Forever Treasures is pleased to offer these 1956 authentic 3/4″ Elvis hit song pinbacks. “Don’t Be Cruel” has a closeup of Elvis, surrounded by a gold record.  “You’re Nothin’ But A Houn’ Dog” the E.P.E. trademark hound dog  artwork. These vintage treasures, come with a “Long live the King Guarantee.”