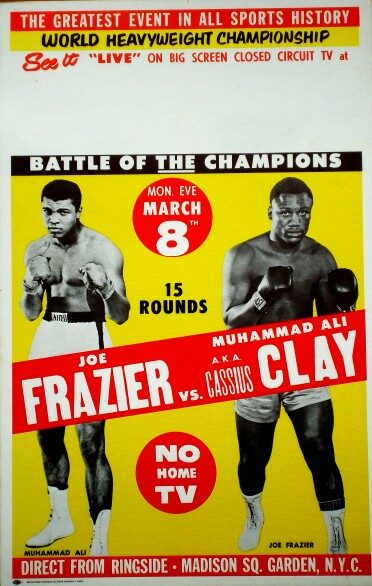 This March 8, 1971, fight was the first between Muhammad Ali and Joe Frazier. It will be forever called “The Fight of the Century.” Both boxers entered the ring undefeated. To give them equal billing, Ali’s picture is first and Frazier’s name is first as well.  The poster reads Muhammad Ali a.k.a. Cassius Clay in larger print, because this was early use of his new name. It marked, the last time, the name Cassius Clay would appear on a poster. Ali was stripped of the Heavyweight Title, when his new Muslim religion had him not enrolling in the armed forces. Less than a year after this Frazier fight, the Supreme Court overturned the decision that had taken Ali’s Heavyweight Title. Frazier would win this fight. Ali would win their next two epic battles.