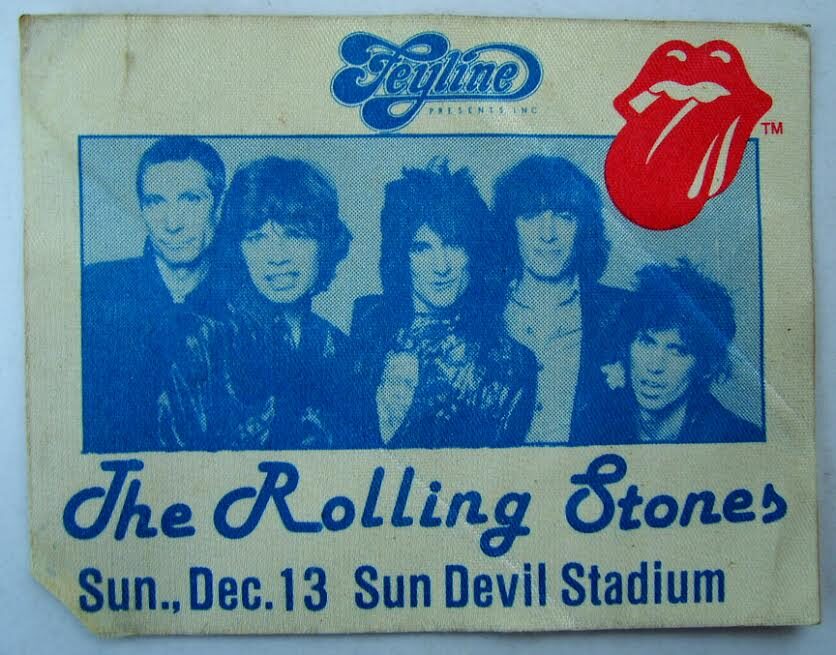 With 7 albums, on the 1981 charts, this was one of the Rolling Stones, most successful tours. Their “Tattoo You” tour set records at every stop. Sun Devil Stadium, had 75,000 in attendance. They paid $1.3 million to see the “Greatest Rock Band of All Time.”

We are offering a prized, Rolling Stones Band Photo backstage pass to this memorable concert.  Backstage passes were limited, due to Keith Richards recovering from drug issues. His recovery was evident. Keith was brilliant the entire show show.

The Stones 24 song set list, opened with “Under My Thumb,” and included classics “Let’s Spend The Night Together,”  “Time Is On My Side,”  “Waiting On A Friend,”  “Tumbling Dice,” “Honky Tonk Woman,” “Brown Sugar,”  and closing with “Jumping Jack Flash.”  Reviewers and fans agreed, Mick and the band were overwhelming with their “Satisfaction” encore offering The Stones, at their best.

The “Tattoo You” Tour set box office records. 4 million attended. The tour grossed $50 million, with The Rolling Stones netting $22 million after expenses. The first ever, pay per view event, was offered from this tour.  Jovan Musk was the first corporate sponsor of a  rock tour, paying $1 million to have their name on The Rolling Stones Tickets.

Hal Ashby, made a film of this tour, called “Let’s Spend The Night Together” grossing another $50 million.  This Dec.13, 1981, Sun Stadium Rolling Stones Backstage Pass, will   have everyone believing, You, Mick, Keith and the boys, did spend the night together !!