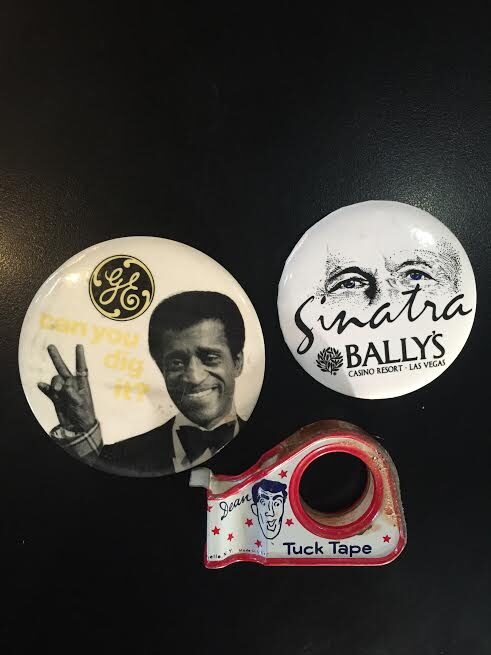 Frank Sinatra is considered, the greatest international entertainer of the 20th Century. He has sold 250 million records and received 11 Grammy Awards. Sinatra’s catalog of hits, is the most extensive in recording history. His recording career, has succeeded in every era. Television Emmy Awards and 3 Academy Awards have Sinatra winning in all categories. 2 Best Song Academy Awards, and a 3rd for Best Supporting Actor, in “From Here To Eternity.”

“Hello Young Lovers,”  “Love and Marriage” and “New York, New York,”  are just a few of Sinatra’s Classic Hit Songs.  A huge Elvis Presley fan, he offered his television show, to salute Elvis after he was discharged from the Army. The show “America Welcomes Home Elvis Presley,” was the highest rated television show of 1958. Frank, along with Dean Martin and Sammy Davis Jr. were responsible for the “Rat Pack,” and their ultimate night club events of the 1960’s.

Dean Martin is an American singer, actor, comedian and film producer.  He is one of the most popular, enduring entertainers of the mid-20th Century.  Dean was nicknamed “The King of Cool,” for his effortless charisma. By 1950, Dean and Jerry Lewis were America’s # 1 Comedy Team. They sold out, all personal appearances, had their own television show and as a team, a flourishing film career. Dean had # 1 hit songs as well. In 1956, Dean and Jerry split up.

Dean Martin’s career became legendary.  His hit songs never stopped. His 1964, signature song “Everybody Loves Somebody,” knocked The Beatles out of the # 1 spot.  His movie career offered the same success. He starred in films with Marlon Brando, Shirley MacLaine , John Wayne and Frank Sinatra.

In 1964, Dean Martin starred in his own television variety show.   After a very successful 9 year run, he starred in another show, that ran 11 more years. In 1965, Dean Martin was the highest paid American entertainer . Elvis Presley considered Dean Martin, “The King of Cool.” Elvis said, “Dean’s cool, romantic way he sings a ballad, influenced how Elvis sang ballads.” Dean would be the boozy, charming clown, of the Rat Pack.

Sammy Davis Jr. was the most versatile entertainer of these 3 lifetime friends. Sammy was a great dancer. His powerful voice, and world class impressions, had many saying, “Sammy Davis Jr. is the Greatest Entertainer of All Time.”  All his personal appearances were S.R.O. Rave reviews for his Broadway Shows,  Motion Picture success, and a catalog of hit songs, demonstrated Sammy’s versatility. He had his own television show, and was often featured in “General Electric Theater.”  S.D. Jr. was the face of G.E. commercials as well.  In Las Vegas, Sammy was 1 of the few, to know Elvis Presley socially.

By  1960, Sinatra’s  “Rat Pack”  with Dean and Sammy reigned, as the ultimate Show Business Event. The 3 superstars, performed, an improvised show. All the joking and singing, was their way, of entertaining themselves. . They always offered  the best = OF THE BEST.  The “Rat Pack,” also made films together, television shows and recordings as well.

“The Rat Pack,” formed by Frank Sinatra, with Dean Martin aboard, welcomed Sammy Davis Jr.  …. He was 1/3 of The Big 3, on stage, to sing, dance, and be the butt of one-eyed, Black-Jewish jokes. They all sang, danced and made fun of each other. Boozing along the way.  The magic of Frank, Dean, and Sammy on stage together, had the high rollers delirious.  Frank, Dean and Sammy made films together. The original “Ocean’s 11,” was one of their best. This “Rat Pack.” formed a Hollywood “A” List social scene. They offered, the “Cool Life,” as they lived it.   I’m happy, we can offer a vintage treasure from all 3 legends.

My Forever Treasures, is pleased to offer,

2. Frank Sinatra Bally’s Hotel, Las Vegas  Promotional Pinback. Las Vegas & Sinatra, are 2 Hearts, that beat as one. 1980’s, great image of “The Chairman of the Board.”  When people ask, where you got this ? Tell them, you got This, at Sinatra’s show in Las Vegas !!