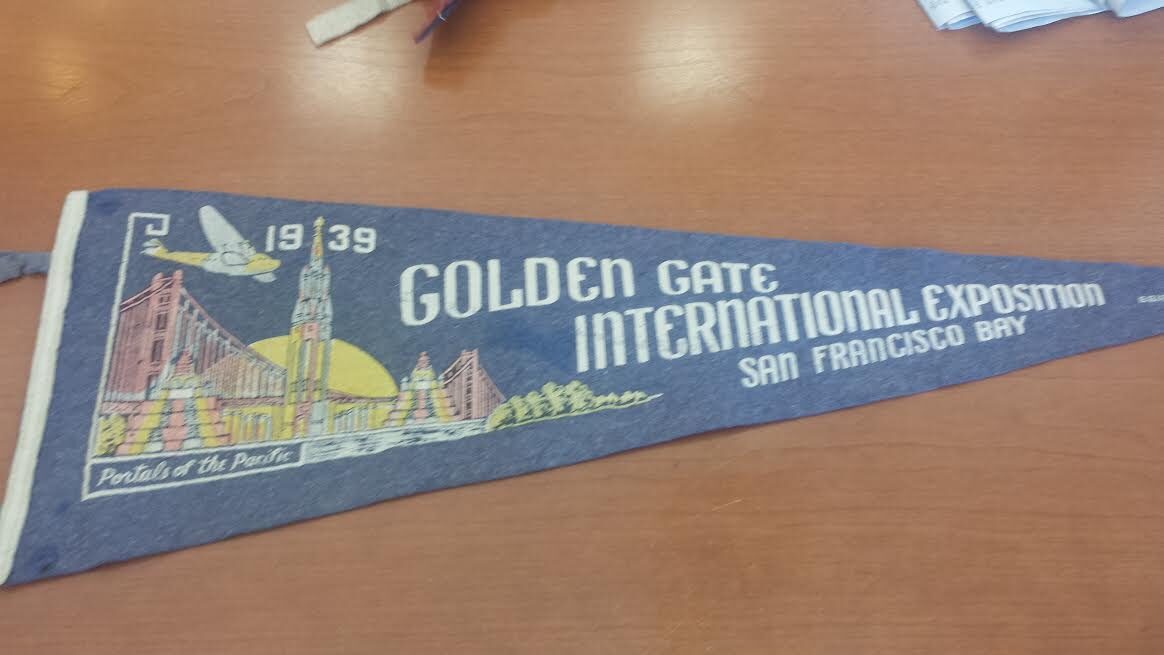 The 1939, Golden Gate International Exposition, at San Francisco Bay, is an historically unique Exposition. This is one of the few, to open when the world was at war. The Czechoslovakian President, fled to Romania.   In Germany, being a member of Hitler’s Youth Movement, was now mandatory. Poland and The Netherlands mobilized, for the possibility of German invasion. Britain and Germany both sank ships. In the U.S., President F.D.R. declared America’s neutrality. As San Francisco’s, “Portals of the Pacific” Themed, $60 Million International Exposition, opened Feb. 14, 1939.

Unlike the devastation, unfolding in Europe, this International Exposition, offered impressive new Art Deco structures. Lush gardens, dancing water displays, and even a world class Entertainment Theater, awaited excited patrons. Instead of complaining about the war, San Francisco was in a celebratory mood. Honoring, all countries with borders on the Pacific.

This Exposition, believed there would be a peaceful future among all countries. Clark Gable cut the ribbon, opening this great 1939 event ! Benny Goodman “the King of Swing,” had neutral U.S. citizens, dancing all night long.  F.D.R. assured U.S. neutrality in Europe.

In Europe, Germany attacks and occupies Czechoslovakia. The President of Poland flees to Romania. Germany claims it has no intentions of attacking Poland. Hitler dissolves the Republic of Czechoslovakia. Britain warns, “It will declare war on Germany, if it attacks Poland.”  Sweden and Switzerland mobilize, for the possibility of a German invasion. Britain evacuates many citizens, due the possibility of war.

F.D.R. declared a limited national emergency, and the 1939 S.F. International Exposition continues. All countries had a parade, in native costumes, as 1,000 doves were released.  At the U.S. pavilion, Connecticut ratified The Bill of Rights, 148 years late. At the lip syncing pavilion, a classic “Wizard of Oz,” lip syncing contest was held. All contestants, received Judy Garland Bobble Head Figures.

At the very popular Jolly Zone, patrons packed, Sally Rand’s Naked Cowgirl Exhibit. For 25 cents, patrons could look through a glass wall, and see naked women, in G Strings and Cowboy Boots playing badminton. During it’s first week, The Naked Cowgirls drew 65,000 people. This was the most popular attraction, at the 1939 Exhibition. The first U.S. air conditioned car, a Packard was awarded, to the winner of an Errol Flynn look-alike contest.  All Pacific Island nations, provided free totem pole carving lessons.

In Europe, Holland is attacked by Germany, and declares, “It is in a State of War.” Denmark mobilizes for impending invasion. Canada, Iraq and Saudi Arabia declare, they are at war with Germany. Hitler attacks Poland and bombs Britain. France and Britain declare, “A State of War with Germany.”

A somber mood was created, by the escalating war in Europe. Yet, Comedian Jack Benny had relatively neutral Americans, laughing afternoon and night, for 10 consecutive days. Sally Rand’s Naked Cowgirls Exhibit, added a Trampoline for the Naked Cowgirls. To escape, the horror of war in Europe, patrons paid double, to watch jumping Naked Cowgirls.

Closing night, offered a huge Pacific Island festival. + A Special Event.   Exposition patrons celebrated Bing Crosby’s Arena Concert, like it was New Year’s Eve. Bing’s “White Christmas,” had Americans believing, 1939 would bring a “White Christmas.”  San Francisco’s “Portals of the Pacific,” was a success. During these very difficult times, S.F. offered an international exhibition, that will live on forever.