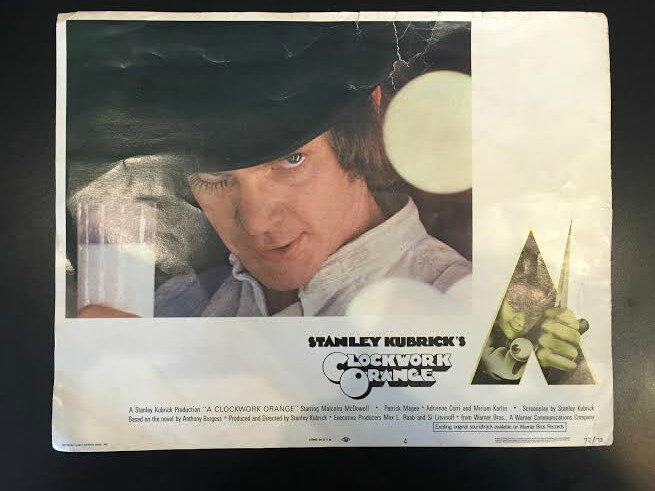 “A Clockwork Orange,” 1971 science fiction, dysopian crime film takes place, in the near future. Stanley Kubrick’s adaption of this screenplay, had him nominated for An Academy Award. The story offers Kubrick’s detached view, of  a shocked violent future.  He also produced and directed the film. As a result, political, economics and social issues are not sparred as well !

Malcolm McDowell stars as a charismatic, sociopath delinquent. The film chronicles, his passion for rape and ultra-violence. Kubrick uses ultra-violence to raise the bar, for more vicious killing, torturing,, crippling and dehumanizing victims.  McDowell even rips an eyeball, out of an opponent’s face. Malcolm believes, he must do this to survive.

The excess of violent sprees, is the film’s trademark. As a result, it is considered one of the most disturbing films of all time. Stanley Kubrick’s “A Clockwork Orange,”  was nominated for, 4 Academy Awards. He received 3, one for the script, + 1 for directing, and producer, for a Best Picture Nomination as well.

“A Clockwork Orange,” was so successful, it even resulted in several copycat public versions of  “ultra-violence.” The film’s lobby card is #72 of 80,  10″ x 14″, and offers an iconic sneering version of Malcolm McDowell’s face, one eye closed, with a knife and an Eye Ball, in each hand. It appears, sinister runs through his veins.  Framed on your wall, Kubrick calls this, classic ~ “Demon Eye Candy.”