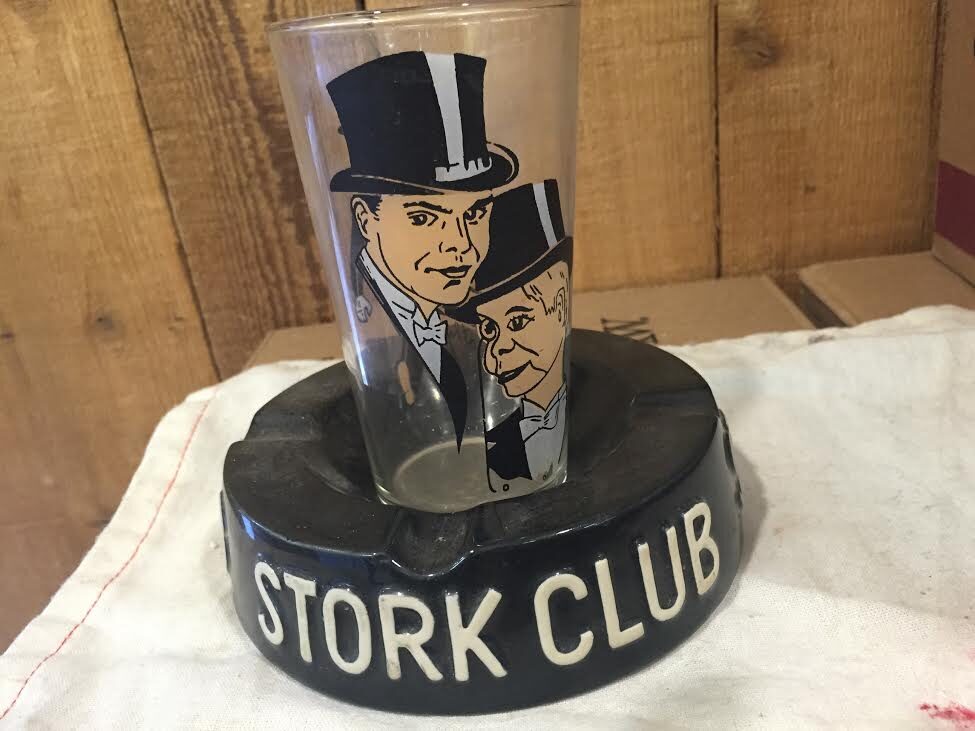 The Stork Club, was a nightclub in Manhatten N.Y.C. During it’s existence, from 1929-1965, it was one of the most prestigious, in the world. A symbol of Cafe Society, the Wealthy, Elite, Movie Stars, Celebrities, Showgirls, and Aristocrats all mixed together, in the Club’s V.I.P. Room. The notorious, Walter Winchell wrote his column and broadcast his radio show, from Table 50.

The club, counted among its guests, The Kennedys, The Roosevelts, Reagans, Duke and Duchess of Windsor. Royalty, from around the world. Grace Kelly and Prince Rainier, announced their engagement, from the Stork Club. The Club, cashed Douglas Hemingway’s $100,000 movie script check, so he could pay his bill.

Clark Gable and Marilyn Monroe were regulars. Frank Sinatra, was at the Stork Club with 3 different wives. Elizabeth Taylor, with 5 different husbands. Hedda Hopper, was trolling for gossip. The Stork Club, was considered the “Best of the Best.” This, vintage Stork Club Ashtray is a treasure, probably once used by an Icon.

Edgar Bergen, and his dummy Charlie McCarthy were the comedy team favorites, of the 1930’s and 1940’s. Edgar, a master ventriloquist never got to show, their huge radio audience his expertise. They never saw him, not move his lips. Even though, they knew Edgar provided Charlie’s voice. The radio audience, still believed Charlie was human. The huge, radio success of ventriloquist Edgar Bergen, surprised critics then and now.

Edgar Bergen, and Charlie McCarthy were so successful, they had their own radio show, from 1937-1956. Charlie was a precocious child. Albeit , with a Top Hat and Monocle. He was debonair and girl-crazy. But, as a wooden child could, get away with saying anything he chose. They, were in many films. Among, them are “The Goldwyn Follies.”1938. “Stage Door Canteen.1943. Endless television shows and personal appearances. No ventriloquist & dummy, has ever approached the success of these 2.

Charlie McCarthy, rests at the Smithsonian Institute. My Forever Treasures, is pleased to offer this rare Edgar Bergen and Charlie McCarthy 4.5” drinking glass. It, has survived 80 years. Certainly a Ventriloquism Treasure. The glass comes with a “Where did you ever find this” Guarantee. The Stork Club Ashtray, is a chance … to remember = The Entitled.