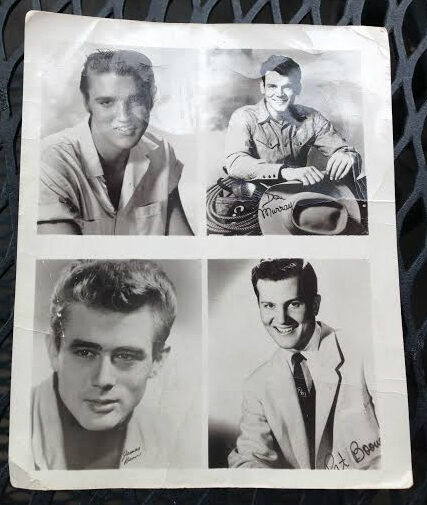 1.Elvis Presley, Rock and Roll Sex Symbol. “Heartbreak Hotel” and “Blue Suede Shoes” both # 1… His film and gold record “Love Me Tender” both released as well. Long Live The King.

2. James Dean, Movies Star Sex Symbol. He received Academy Award nominations for “East of Eden” and “Giant” posthumously. James Dean became a legend for his misunderstood teenager, in “Rebel Without A Cause.” His tragic premature death, in a car crash at just 24, immortalized his legend.

3. Don Murray, a Cowboy Sex Symbol, for his role as the cowboy who’s looking for rodeo gold, but ends up lassoing Marilyn Monroe’s heart in “Bus Stop” which brought him an Academy Award Nomination. 16 years later, to pay for his children’s college tuition, Don Murray was playing a governor who hates apes, in “Planet of the Apes.”

4. Pat Boone is the squeaky clean, Safe Sex Symbol of this this group… His daughter, Debbie Boone had a # 1 hit song “You Light Up My Life.”

Elvis Presley “Love Me Tender” 1956, Limited Edition Gold Record Key Chain – While on a break from filming, Elvis appeared on the Ed Sullivan Show and sang “Love Me Tender” for the first time. Within; 2 weeks the song went gold, before it was even released.