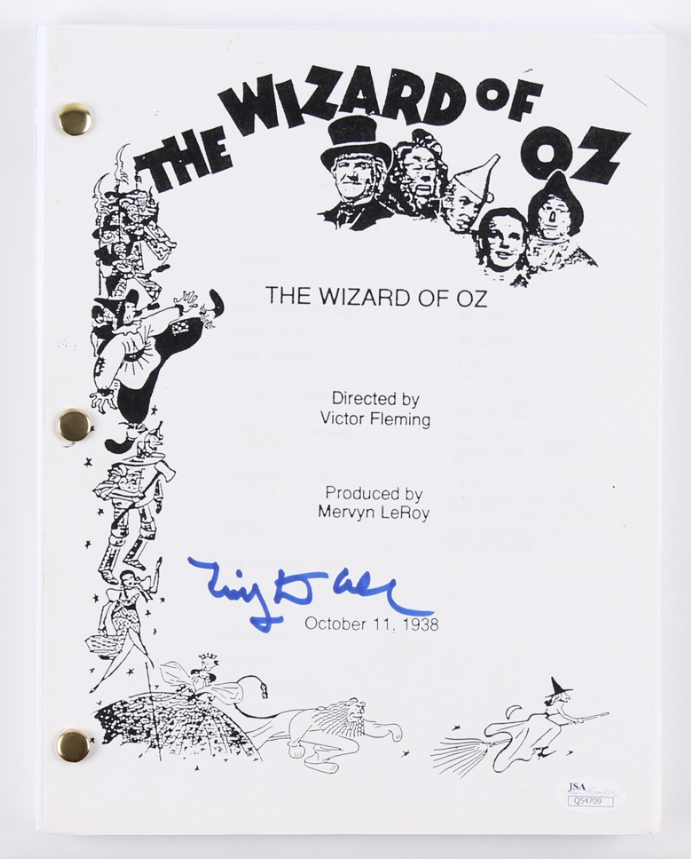 The “Wizard of Oz,” is a 1939 American musical comedy-drama fantasy film. Produced by M.G.M., and noted, for it’s theatrical use of Technicolor, fantasy storytelling, music and unusual characters. Nominated, for 6 Academy Awards, and winner of The Best Song Academy Award, for “Over The Rainbow.” The film, won a Best Original Score Academy Award as well.

As Dorothy, Judy Garland won the hearts of audiences around the globe. Her co-stars, Bert Lahr as the Cowardly Lion, Ray Bolger the Scarecrow, Jack Haley the Tin Man, and Dorothy’s dog Toto, are among the reasons, “The Wizard of Oz,” has become an icon of American culture.

During a tornado in Kansas, Dorothy is knocked unconscious. She wakes up, in “Munchkin land.” The “Munchkins” befriend Dorothy and Toto. Tiny Doll, an original Munchkin Maiden, signed this movie script.

Along the Yellow Brick Road, Dorothy and Toto come upon, The Cowardly Lion, The Scarecrow and The Tin Man. They, try to help Dorothy,find her way back to Kansas. The Munchkins, are also on her side. She’s constantly, facing challenges, from The Wicked Witch !! The road offers, our heroine endless obstacles. She needs a MIRACLE. So, Dorothy clicks her ruby red shoes and,..”you’ll have to see the movie, to find out what happens next.” CBS Television’s, yearly airing of “The Wizard of Oz,” has made it, one of the best known films in movie history. The Library of Congress designated, “The Wizard of Oz,” to be preserved for being historically and aesthetically significant.

Tiny Doll, a “Munchkin Maiden,” in the “Wizard of Oz,” signed the front page, of this script. JSA Included. She, came from a family of midgets, who worked Sideshows, for R. Bros. B. & B. Circus, for 30 years. Tiny also appeared in, 1927’s silent films “Special Delivery” with Eddie Cantor,and Laurel and Hardy’s “Sailor Beware.” See her, in 1930’s Laurel and Hardy’s “Good News.” Long before, her “Munchkin Maiden” role in “Oz,” Tiny Doll, had a supporting role,in Tod Browning’s, 1932 Macabre Classic “Freaks.” It’s, the dark story, behind the Circus Sideshow. It’s initial release, was banned in Britain. “Freaks,” has become a stellar dark classic.It’s reputation continues to grow. All, Freaks in the film, are Sideshow Legends. In 1960, Tiny retired to Sarasota, claiming “Political Correctness,” put an End to Sideshows.”

My Forever Treasures, thanks Tiny Doll for autographing, the top page of this “Wizard of Oz” Script.126 pages. JSA Included. Framed on Your Wall, this treasure will offer you, “Munchkin Era Eye Candy.” Tiny, was Sideshow Royalty. She, knew Jo-Jo, “The Dog-Faced Boy,” Priscilla, The “Monkey Woman” and Derek,The”Alligator-Skin Man” on a FIRST NAME BASIS.:) If you, just clicked your ruby red shoes, hoping for a Tiny Doll, autographed “Oz” Script. = It Worked.:)

Follow The Yellow Brick Road – The Wizard Of Oz