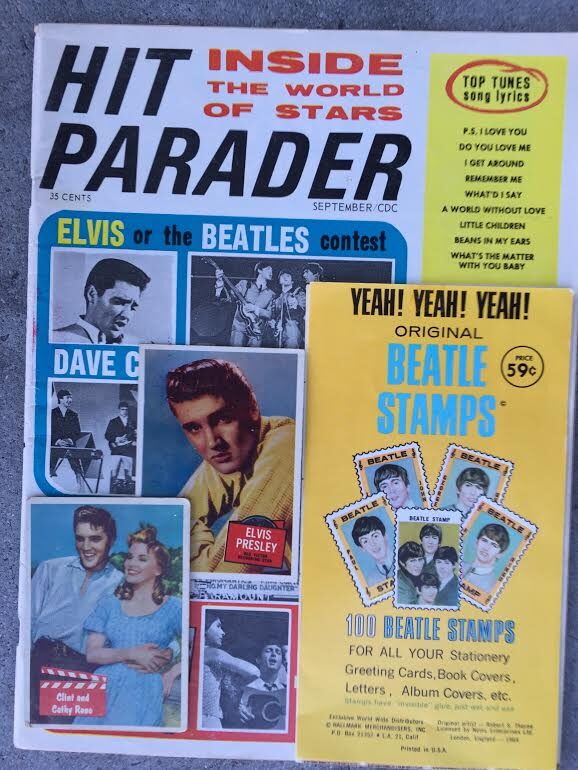 Hit Parader (1942-1980’s) , was the top music magazine, for song lyrics, chart rankings, music reviews, interviews, photos, music trivia, fan mail and contests. In Sept. 1964, it offered an Elvis vs. The Beatles Contest. Elvis Presley and The Beatles, are the 20th Century’s two most successful and recognized artists on earth. Who would their fans vote for ?

Elvis Presley, will forever be considered “The King of Rock and Roll.” He had 18 # 1 hit songs, from, 1956’s “Heartbreak Hotel” to 1969’s “Suspicious Minds.” All, of his 150 albums and singles, have gone gold, platinum or multi-platinum. All of his Gospel Albums, won Grammy Awards. He is the only performer, to be inducted into The R. & R., Country & Gospel Hall of Fame. During, Elvis prime concert years, he gave 1,100 performances. All Sold Out ! All, 31 Elvis Presley films showed a profit. Elvis, “Lifetime Achievement Award,” has his fans declaring, “Long live the King.”

The Beatles, became 1964’s worldwide sensations. “Please Please Me,” “She Loves You” and “I Want to Hold Your Hand,” gave them 3 worldwide # 1 Hit Songs in a row. Over, the next 6 years, The Beatles averaged a Top Selling Single, 1 of every 6 weeks. A Top Selling Album, 1 of every 3 Weeks. They sold 1 Billion Records Worldwide. 17 of their 1st 18 singles, went to # 1. Their films, “A Hard Day’s Night” and “Help” were as successful, as their music. The Beatles Shea Stadium Show in 1965, was the 1st Rock Show Performed in a Stadium. To a Sold Out 54,000 Screaming Fans. They loved Elvis. John Lennon, told him “Elvis, before there was you. There was nothing.”

Both, drove their fans wild. Elvis, by shaking his hips. The Beatles, by shaking their mop-tops.  The Beatles said, “They prefered Elvis Fans.” “Presley’s, audiences simply Loved Him.” Paul said, “Our fans, come to scream and riot.” “They are batty.” Hit Parader Magazine believed, this was the perfect time for an Elvis vs. The Beatles Contest. The contest asked, “Who will you love forever ?”  “ELVIS or The BEATLES ?” The winners will be decided, based on “Originality and Neatness.”

The Hit Parader Contest Cover, includes a souvenir collage. Elvis, has 2 trading cards. An iconic Hit Maker Card. + A Fan Favorite, from “Love Me Tender.”  The Beatles, “YEAH ! YEAH ! YEAH !” Stamp Collection. Both, Elvis and the Beatles souvenirs are favorites around the world. They should be prized parts of your collection.

It’s very rare, My Forever Treasures, offers Iconic Music Combinations. This Collage & Contest, has us in an “Eye Candy” Bonus Round. Framed on your wall, will have your friends loving this item. “YEAH !  YEAH !  YEAH !”