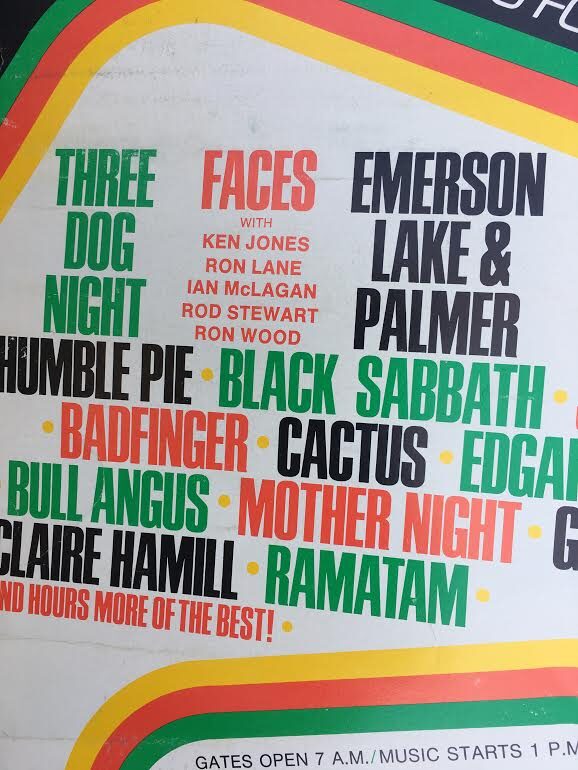 This, was among the Faces final concerts. Rod Stewart, had already reached # 1, as a solo artist, with his classic “Maggie May.” In a few years, Ron Wood, would be departing to join the Rolling Stones.Their show set included, Elton John’s “Country Comfort” and McCartney’s “Maybe I’m Amazed.” The Faces, co-headlined the festival, with Emerson, Lake and Palmer, Humble Pie, Edgar Winter, J. Geils Band, + a dozen favorites.

The great show, was victimized, by cold inclement weather, pouring rain and mud for as far as the eye could see. As a result, the show ran many hours behind schedule. Edgar Winter’s, long bluesy rock, “Tobacco Road” got great response. Torrential rain, had the second day’s show, begin late at night.

Emerson, Lake and Palmer, performed at 4 a.m. The Faces, at 5 a.m. and Three Dog Night, 7 a.m. as the morning sun was rising. “Joy to the World,” and “Mama Told Me Not To Come,” were favorites. Emerson, Lake and Palmer’s “Lucky Man” and Humble Pie’s, “I Don’t Need No Doctor” had the audience overwhelmed. As a result, Summer Music Festivals would continue to thrive.

My Forever Treasures, is opening our 1972, rare 45 year old rock concert poster vault. RARE, because The Faces, with Rod and Ron would be moving on. Frame this, and on the wall, show off your rock music poster, “Eye Candy.” A vintage museum piece. It’s true.))