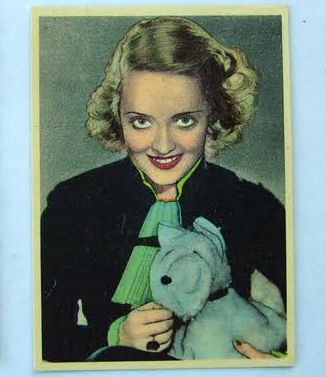 Bette Davis, was an American actress of films, television and theater. She, is regarded as one of the greatest actresses, in Hollywood history. She excelled, at all genres. Her, greatest successes, were her roles in romantic dramas.Bette, was one of American Cinemas most celebrated leading ladies.

Famous, for her forceful and intense style. B.D. was the first actress, to be nominated for 10 Acting Academy Awards. Winning, Best Actress Academy Awards, for 1936’s “Dangerous,” and 1939’s “Jezebel.” The American Film Institute, lists Bette Davis, at the top of their Best Actress List, for Classics like, “All About Eve,” “Now Voyager,” and “Dark Victory.” Critics and fans agree. This brilliant actress, is “Simply the BEST.”))

Collecting, Famous Actors, and Actresses Tobacco/ Cigarette Trade Cards, were the 1920’s-1940’s rage. Vintage, Movie Star Trade Card Collections, are still, as popular as ever. My Forever Treasures, is parting with one of Our Bette Davis Favorites. There’s no defense, for young Bette Davis’s Trade Card smile. That’s the truth.) It’s, “All About Eve,” “EYE CANDY” Time.