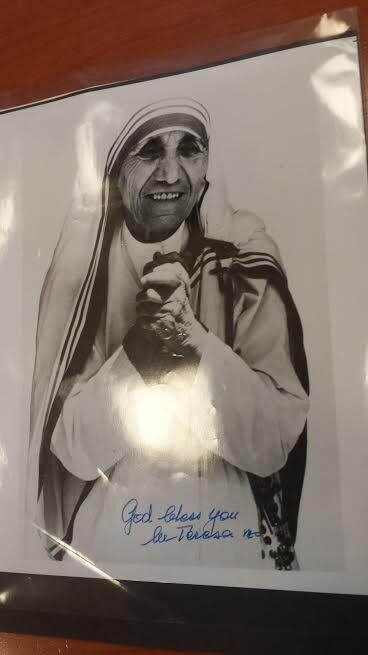 The child who would become Mother Teresa, was born in 1910. At a very early age, she was overwhelmed by her religious desires.  Other children went to the school yard to play. She found herself, going to church, and praying just for fun. As an adult , this would become her only hobby. During her childhood, analytic findings offered,  she had “Saint Potential.”

To take advantage of this gift, at 18 she studied at a convent in Ireland.  Many girls her age were drawn to fashion, boys and fun.  She found herself giddy, at the prospects of poverty, chastity and obedience.  She took her vows in 1928 and final vows as a missionary, in 1937.

In 1946, Sister Teresa, showed signs of missionary overdrive.  She believed she had a call within a call, to leave the convent for the squalor,  found on the streets of Calcutta. Her ultimate passion, was to  help the poor, abandoned and dying. The Pope granted her wish.  Mother Teresa chose to live among these desperate people as well.  She had her mail delivered, to M. Teresa, Squalor, Calcutta. Every donation, arrived safely.

Mother Theresa created, The Missionaries of Charity. She and 400 other nuns (who served as her nun posse) made their only objective, to give, help, and love, to those who had nothing.  Mother Teresa wanted nothing in return. She believed her serving these people, was her way of serving Jesus.

In 1979, Mother Teresa received The Nobel Peace Prize. A very humble woman, in Latin she said, “This award isn’t necessary. I would have been happy, with a stuffed animal from the top row.” In 2003, she was beatified. An important step toward Sainthood.  2 miracles are necessary,  to seal the deal. Mother Teresa has one in hand.  Rumors have, lawyer Gloria Aldred on a retainer, trying to uncover the second one.

Mother Teresa Bio: The Life of A Healer

Mother Teresa is set to become a saint, some 18 years after her death, now that the Vatican has officially attributed a second miracle to her.

She has been credited with the healing of a Brazilian man from multiple brain tumours.