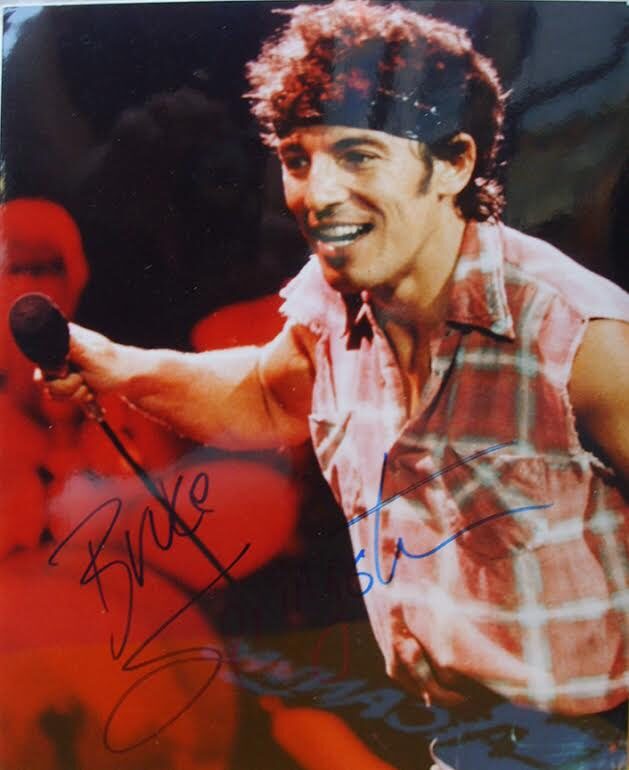 Bruce Springsteen, is an American singer-songwriter, known for his work, with the E. Street Band. He’s, from New Jersey. Fans, also know him by his nickname, The “Boss.” “Born to Run,”1975 and 1984’s,”Born in the U.S.A.” are his most successful albums. On both releases, he finds pleasures, in the struggles of daily American life. Musical genres include, early blues, R. & B., jazz, early rock and roll and soul. Influences, include Joe Cocker Mad Dogs & Englishmen, Leon Russell and Van Morrison. As, we offer his incredible autographed photo, Springsteen has sold more than 120 million albums worldwide. Let’s start, at the beginning.

Discovered, in 1972 by, legendary talent scout John Hammond. Bruce, was brought to Clive Davis, and signed to Columbia Records. Hammond, had brought Bob Dylan to Columbia, and they were expecting an acoustic album, from Springsteen. He, brought many of, his N.J.-based colleagues/musicians/pals, to the recording session. Thus, forming the “E. Street Band.” The debut album, “Greetings from Asbury Park,” was released Jan.1973. Establishing, Bruce, as a “critical” favorite. “Blinded by the Light,” had critics comparing him to Bob Dylan.The rock press,(his earliest champion) offered, “Springsteen, sings with a freshness, I haven’t heard, since I was rocked by “Like a Rolling Stone.” The commercial success, of “Spirit in the Night,” showed Van Morrison’s influence.

Released Sept. 1973, 2nd album, “The Wild, the Innocent and the E. Street Shuffle,” was critically acclaimed. “Rosalita,” continues to be, one of his most beloved songs. After, seeing him perform, Rock critic John Landau wrote, “I saw rock and roll future and it’s name is BRUCE SPRINGSTEEN.” “He, made me feel like, I was hearing music, for the FIRST TIME.” John Landau, helped Bruce finish, his epic 1975 “Born to Run” Album. Landau, become Springsteen’s manager and producer. The album, would have Bruce, achieve huge commercial success. Rolling Stone, voted “Born to Run,” “One, of the 50 Moments, that changed R. & R.” The songs, “Born to Run,””Thunder Road” and “Tenth Avenue Freeze-Out,” remain perennial favorites.

“Born to Run,” had Bruce Springsteen appearing, on the covers, of both Time Magazine and Newsweek Oct. 27, 1975. His, tours became known, for their intensity and length. International success, has continued to this day. His, prolific songwriting, has critics agreeing, “Springsteen, has more words in one song, than other artists have on an entire album. “He’s, recorded 19 studio albums. 12, including classics, “The River,” “Nebraska,” and “Born to Run,” have gone double platinum or better.”Born in the U.S.A.,” has 7 Top 10 hits. 30 million records sold worldwide. “Dancing in the Dark,” brought Bruce a # 1 Hit Song. A multiple Grammy winner, with a Best Song Academy Award for, 1984’s “Streets of Philadelphia.” “The Boss,” sang and played on the iconic, “We Are the World.” Inducted, into both the R. & R. and Writer’s Hall of Fame. The, “Boss” has been Very Busy.:)

Idolized, by fans around the world. Springsteen, continues to be both a commercial, and popular phenomenon. My Forever Treasures, has always loved “BRUCE.” We’re offering, our most requested treasure. This, incredible autographed color photo of “The Boss.” Framed, on your wall, enjoy this “Icon Eye Candy.” i.know.you.will.