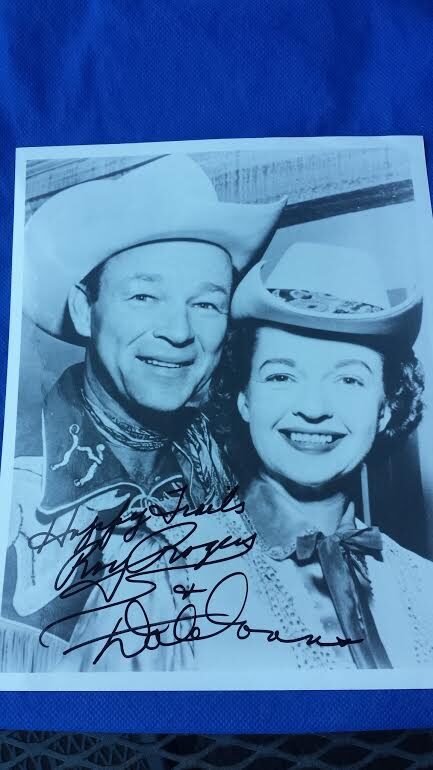 Born, Leonard Slye, Roy Rogers was an American singer and actor, who was one of the most popular Western Stars of his era. Known, as “King of the Singing Cowboys.” Roy, appeared in more than 100 films. Achieved great success on radio and television. Starring, in his own, “The Roy Rogers Show.” In 1947, he married Dale Evans, and she co-starred on his show. Roy’s horse “Trigger,” and his dog, Bullet,” and Dale’s horse, “Buttermilk,” received lots of fan mail.:) Roy and Dale’s S.R.O. appearances at rodeos, was always, a huge event. Andy Devine and “Gabby” Hayes were very popular sidekicks. 1951-1957,”The Roy Rogers Show,” was a top 1950’s winner.

Roy Rogers success with “The Son’s of the Pioneers,” offered, both “Tumbling Tumbleweeds” and the classic, “Cool Water.” Dale Evans, wrote their “trademark,” “Happy Trails.” Dale, has 2 Stars, on the Hollywood Walk of Fame.” Both, Radio and Television. Roy Rogers, will always be, “The King of Cowboy ” singers.

My Forever Treasures, is in a vintage 1950’s western hero mood. Our, Roy and Dale autographed photo is wishing, each and all. “Happy Trails to You” a rare King and Queen of 1950’s. This autographed photo, of Roy Rogers and Dale Evans, seals.the.deal.:)