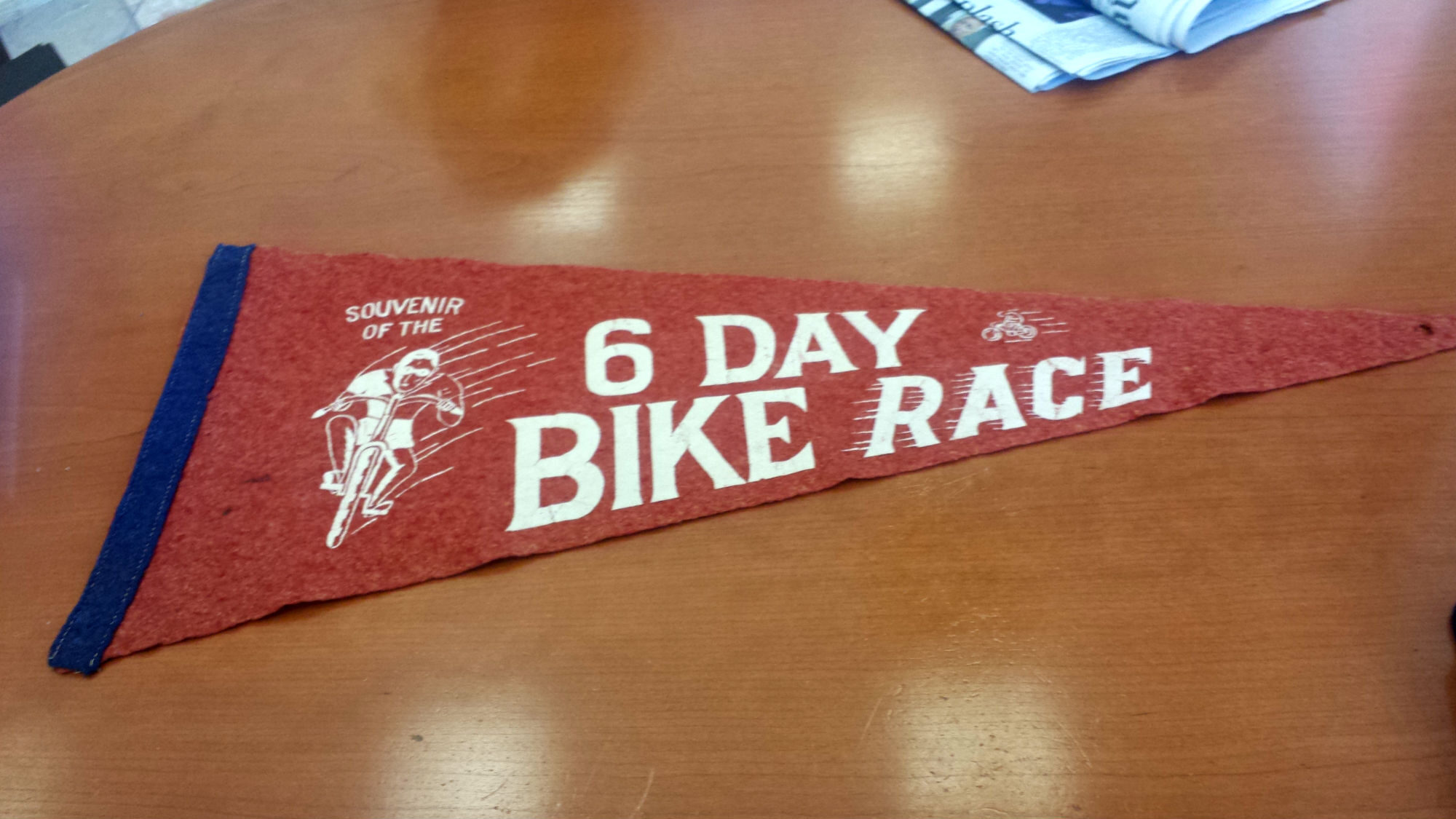 My Forever Treasures goes back in time to offer our bicycle pennant treasure. The 6 Day Bike Race was the rage in 1870’s Britain. Europeans loved the drama of the endless cycling. This was before automobiles. The public wanted to see a bicycle racer show he was faster than a hound, horse or locomotive. This was also before baseball, basketball & football. 6 continuous days of non-stop riding, put the fans in a frenzy. By 1900, it’s popularity resulted in professional bicycle race winners earning as much as a $1,000 purse or more.

Europe’s successful Berlin 6-Day Bike Race, and endless others had 6-Day Races thriving in the U.S. The Sixers filled arenas in Madison Square Garden, Atlantic City, Boston, Chicago and on. The winner, was the racer who rode the most laps/miles in the specified time.Non-stop racing with as little sleep as necessary had the bike riders employing trainers like in boxing to keep them going. Professional bike riders raced in sprints,chases and elimination rounds as well as the most laps/distance. The best won an unheard of $5,000.

The Sixers brought overwhelming physical demand of the Bike Riders. As little sleep as possible was the call of the 6 DAYS! The races thrived in the U.S. for more than 50 years. George Raft, Barbara Stanwyck and Bing Crosby were huge fans of the 6-Day. The strain of single riders took it’s physical toll. Some were competing near 24 hours without a rest. Physical breakdowns, included delusions & hallucinations. Riders wobbled & fell. When crossing the finish line, some were white as ghosts. Their eyes retracted into their head. The more gruesome the outcome, the more popular the sport became. W.W. 2 and the automobile ended U.S. Sixers by 1950.

Our vintage hand painted 6 Day Bike Race Souvenir Pennant 24″ x 8″, captures the intensity of the rider’s mission. Framed and hanging on your wall, will have friends and family believing you’ve been to an Amsterdam or Madison Square Garden 6-Day Race. Or that it was left to you in a trust. We trust, you’ll enjoy and do the right thing with this ultimate BIKE SOUVENIR PENNANT. Approx. 90 years old. Enjoy.