Silent Films With Charlie Chaplin and Harold Lloyd – Souvenirs, Pennants and Memorabilia by My Forever Treasures 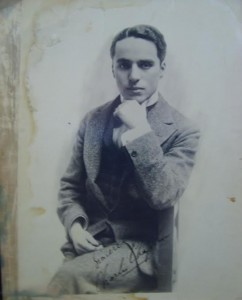 Silent films had no synchronized sound, especially no spoken dialogue. In silent film, the dialogue was transmitted through broad gestures, mime and title cards. Combining motion pictures with sound was not possible in this period due to technical challenges.

Perfection of the Vitaphone system made “talkies” a reality in the late 1920’s. In just a few years, silent films would stop production.

With the invention of Thomas Edison’s Kinetograph, a photo device to capture sequential images and his Kinescope to view them, silent films began. The period 1909-1929 marks it’s place in entertainment history.

As these films increased in length, on screen inter-titles were used, to help the audience understand the action and dialogue. Silent film theaters usually had a piano player which added to the atmosphere. Large cities might have an orchestra. Silent films provided the biggest source of employment for musicians.

The “talkies” would put musicians on the unemployment lines. In silent films body language and expression was exaggerated. Towards the end of that period, Mary Pickford, Janet Gaynor and Marlene Dietrich chose a more subtle natural approach to acting. As a result, they all made the transition to talkies and became movie stars.

Charlie Chaplin was the biggest silent film star. Chaplin’s “Tramp” character was a visual contradiction of baggy pants, a tight jacket, small hat, big shoes and a small mustache to make him look older but not hide his expression. The audiences fell in love with the “Tramp” trying to overcome adversity. He became the most famous, most recognized figure on the planet.

Chaplin’s salary went from $150 a week in 1914, to a $670,000 contract and his own film studio in which to make his films.  Chaplin’s 1925 film “Gold Rush” made a $5 Million profit. In 1936, when the public demanded only “talkies” Chaplin’s silent film “Modern Times” still made millions. Charlie Chaplin is most responsible for making motion pictures the art form of the 20th century.

His character was a bespeckled “everyman” called “Glasses” always trying to get ahead. 1920’s audiences completely related to “Glasses” and his films made millions as well. 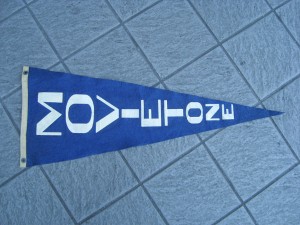 1929 had MOVIETONE Pennants hanging outside movie theaters. Movietone was the first sound on film.

If this pennant was hanging out front, they were showing “Talkies.”

The Film Spectator was the industry film weekly. They provided film reviews, articles, casting, actor and actress ads and all things film. 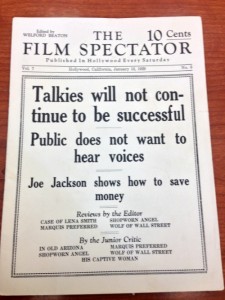 This Film Spectator Jan 12, 1929, shows the desperation that had taken over the silent film community.

It reads “The audience doesn’t want to hear sounds coming from the screen.”

It genuinely marked the end of silent films.

Thank you for your time,
Bobby