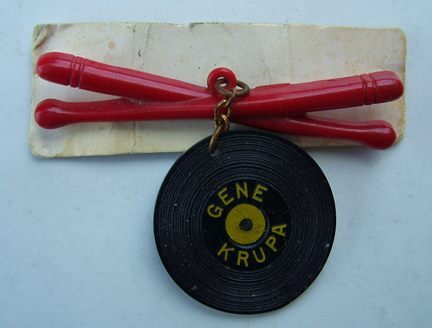 Vintage 1950’s, GENE KRUPA DRUMSTICKS & RECORD PIN. The gold standard of GENE KRUPA souvenirs. He was the first superstar drummer. KRUPA was responsible for the DRUM SOLO to be featured in a band’s show. 1959 film, THE GENE KRUPA STORY is always fun. his trademark was the “call and response” drum solo.

Bobby Kosser: I saw him once, and he was great.

Bobby Kosser: I agree Jimmie, but they claim Krupa was first to feature the “call and response”.”

Paul Lindemeyer: Oh yeah. They go back to the ‘teens with the Clef Club and the Versatile Four. “Tom Thumb’s Drum” was a novelty of 1931 (sometimes a hot one) that gave the drummer some.

Vinny Nicosia: Bobby who is the “they” that make this claim regarding Gene being the first to feature “call and response” in his solo or solos?

Confetta Ann Ras: I WANT THAT.

Bobby Kosser: In the 1959 movie, the GENE KRUPA STORY” they had it appear he was first. you all seem to know more than GENE

Vinny Nicosia: I’m asking who the “they” were that’s all. As to the movie you know by the mere fact that there’s no mention whatsoever of the Benny Goodman Orchestra or the song “Sing Sing Sing” or for that matter any of Gene’s hits with his own orchestra that they (the producers and writers) didn’t actually tell Gene Krupa’s story in the “Gene Krupa Story”

Vinny Nicosia: None of this detracts from the image you posted Bobby…I sure would love to own one myself.

Bobby Kosser: Vinny, I agree with you. and he deserved to have his real story told. I t would have been better than the movie.. Is everyone aware, although Sal Mineo played Gene, GENE KRUPA played the drums on the soundtrack for the movie..

Vinny Nicosia: Well the fact that you can’t really cram an entire life into an hour and forty five minutes makes all Bio Pics kinda shaky where fact is concerned so we except them for what they are, an entertainment.. Some Bio Pics are made very well some ain’t ergo some more entertaining than others.