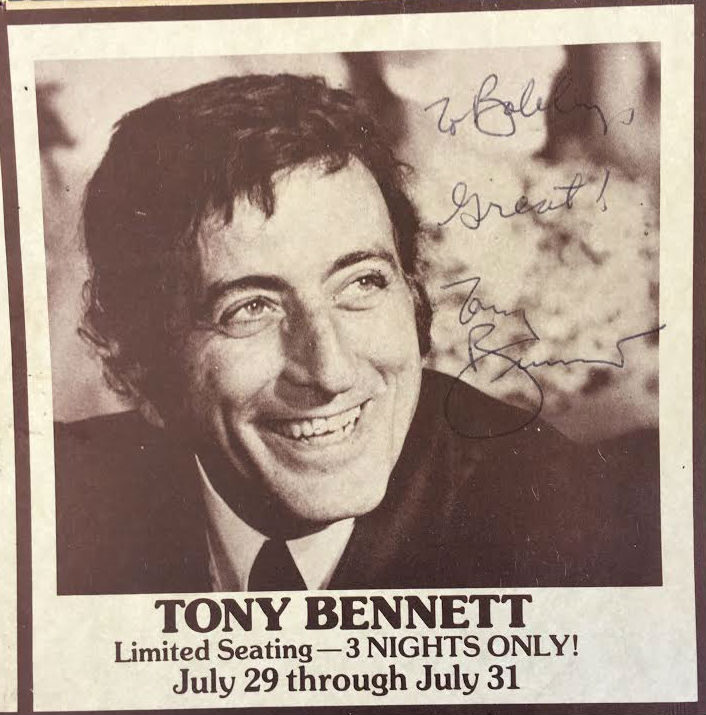 Tony Bennett,is an American singer of popular songs, traditional pop standards, big band, show tunes and jazz. He’s, also an accomplished artist. Several, of his works are displayed, at top galleries and art museums around the world. After, World War 2, Bennett developed his unique singing technique. Tony, was quickly signed by Columbia Records. He, rewarded Columbia w. his 1951 # 1 Hit Song,”Because of You.” This, million seller was Tony’s first hit song. # 1 for 10 weeks!

Tony Bennett, followed w.”Rags to Riches.” “Riches,” also went to # 1, and became one of his classics. “I Wanna Be Around,” “Smile,” and “The Good Life” are Bennett favorites. His teenage fans, screamed for Tony, 7 shows daily at the Palace Theater. In 1962, Tony recorded, his signature International Hit Song, “San Francisco,” and fans will celebrate this song forever. Considered, the “Ultimate Vocalist,” Tony refined his style, to sing jazz. Jazz, had him working with Count Basie and Bill Evans.

He’s, not only bridged the “Generation Gap.” Tony Bennett, has demolished it. Singing with Amy Winehouse, k.d.lang, and Lady Gaga. Exposed, this incredible vocalist, to a new generation. Appearing on MTV Music Awards Shows,”Late Night w. David Letterman,” and The Muppet Show, have given this generation a new icon. Tony and Lady Gaga’s co-starring tour, sold out in every city.

Tony’s appearance on, “MTV Unplugged,” resulted in a Grammy Award Winning Album. Bennett’s claimed, “He’s been unplugged his entire career.” Frank Sinatra, has said “Tony Bennett is the best singer, in the business.” “He’s, the singer who gets across what the composer has in mind.” “And, probably a little more.” Tony Bennett, has won 29 Grammy Awards, including, the last 3 years in a row.His fans, consider him, “The Best of the Best.”

My Forever Treasures, has opened our Icon “Eye Candy” Vault. Thrilled, to offer, A Tony Bennett Autographed Photo Handbill. 3 Nights Only. Framed, on your wall, this Treasure, comes with a Lifetime “Smile on Your Face” Guarantee.