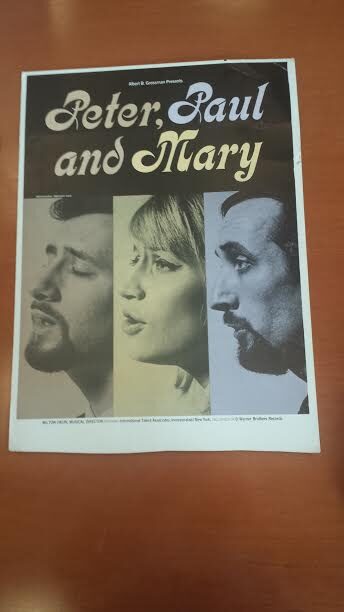 A PETER PAUL AND MARY TOUR BLANK POSTER 14″ X 22″  They used this poster 6 consecutive years.  From 1963 their second year together, until 1968 this Tour Blank Poster
told fans where they were performing.  This poster was not used and survived for 50 years.. Venue  was listed in the blank above their pictures.. Peter Paul  and Mary & James  Brown were the only artists to offer the exact same poster for many years. In 1962 Albert Grossman auditioned the 3 of them, to create  this trio. He served as their producer/manager. P. P.& M.’s 1962 debut album was #1 for 7 consecutive weeks on the charts, in the top 10 for 10 months and in the top 20 for 2 years !! “Lemon Tree ” and “If I Had A Hammer ” were their first big hits.. Hammer went on to become  the anthem for the civil rights movement. Their next 6 albums were top 10 million sellers as well. As the most successful folk music  performers  of that era, PETER PAUL AND MARY became the face of folk music.  “Puff the Magic Dragon” “Blowin In The Wind” and Bob Dylan’s ” Don’t Think Twice, It’s Alright”  went to the top of the charts. They sang at the Washington rally where Martin Luther King gave his  ” I Have A Dream” speech. P.P & M. had a #1 hit with their friend John Denver’s “Leaving On A Jet Plane.” They broke up  in 1970  but got back together and performed for decades. Several Grammy Awards continued throughout  their recording career. A chance to own a rare 1960’s PETER PAUL AND MARY POSTER. The exact same one they used. Great close-up pictures of the trio on this folk music treasure.