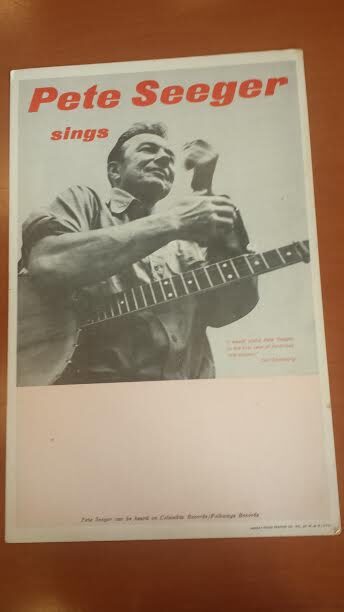 A RARE 1963 PETE SEEGER TOUR BLANK POSTER.  To promote his shows with the venue listed in the blank space. This is unused and has survived 50+ years with the blank untouched. PETE SEEGER is the most reknown American Folk Singer Activist.  His songs expressed his support for the suppressed and the ability to overcome.. He is in the SONGWRITERS HALL OF FAME. for such classics as “IF I HAD A HAMMER ” a big hit by Peter Paul & Mary. “TURN, TURN, TURN #1 by the Byrds “THIS LAND IS YOUR LAND”  championed “WE SHALL OVERCOME” and co-wrote “WHERE HAVE ALL THE FLOWERS GONE”  recorded by dozens of artists and  Marlene Dietrich in English, French and German. A true folk singer/writer icon with a career that spanned 60 years. In the GRAMMY SONGWRITER’S HALL OF FAME and received Grammy Awards in many different categories including best spoken word and songs for children. Anti war and a strong civil rights activist. He was the inspiration for many generations. He had a #1 hit in 1950, “IRENE GOODNIGHT” with The Weavers.  He remained relevant into his 90’s,. Appearing with Dave Mathews, John Mellencamp, Roger McGuinn & Bruce. Springsteen for a Fam-Aid concert. He died in 2014 at 94 and Bruce Springsteen said “I’ve lost a great friend and a great hero..” This rare PETE SEEGER 1963 TOUR BLANK POSTER can be on your wall. it’s musical eye candy to be sure.