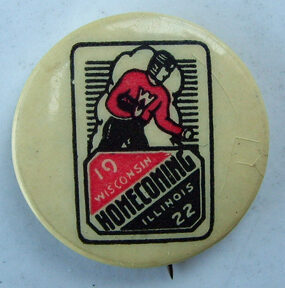 There was a homecoming game in 1917, but WORLD WAR 1 began one month later & football was suspended. It began again with this 1922 HOMECOMING GAME vs ILLINOIS and s considered WISCONSIN’S 1st HOMECOMING GAME. The traditions of bonfires, alumni breakfasts, pep rally and dance began & flourished from this 1922 game on. They lost 3-0. I consider this among the most historical college football pinbacks I’ve seen. The leather helmet, great graphic and condition makes this a football history treasure. 92 years old and counting. a museum piece.