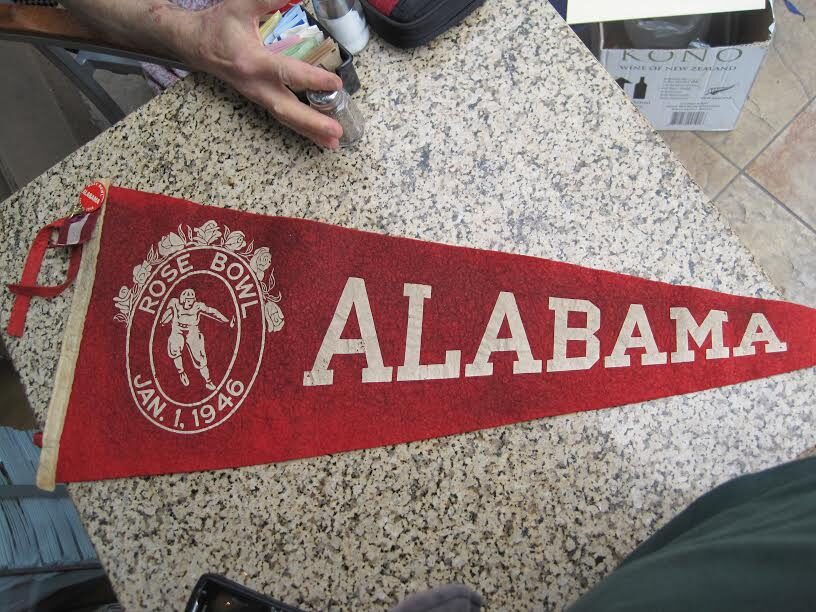 A historical END of an ERA PENNANT. MARKS THE LAST TIME A NATIONAL TEAM FROM THE SOUTH PLAYED IN and WON THE ROSE BOWL.  1 1/4″ ALSO  LAST GAME COACHED BY FRANK THOMAS. the 1946 ROSE BOWL.  winning 34-14 got them named co-national champions with Army at 10-0. the last of his 3 national championships.and he RETIRED. his final record was 115-24-7 second only to BEAR BRYANT  who he coached on the same 1935 ROSE BOWL winning team as DON HUTSON. Coach Frank Thomas also was a QB  at NOTRE DAME COACHED BY KNUTE ROCKNE. Elected to the COLLEGE FOOTBALL HALL OF FAME 5 years later in 1951. this ROSE BOWL VICTORY also avenged Alabama’s only loss in the 1938 ROSE BOWL. Incredible = in his long career as ALABAMA FOOTBALL COACH his teams only gave up an average of 6.5 points a game. FOOTBALL PLAYER WEARING THE LEATHER HELMET OF THE 1940’s. The Holy Grail of  ALABAMA FOOTBALL BOWL PENNANTS   exc. condition + . ON SITE JAN. 1, 1946 ON SITE  PINBACK 1 1/4″.