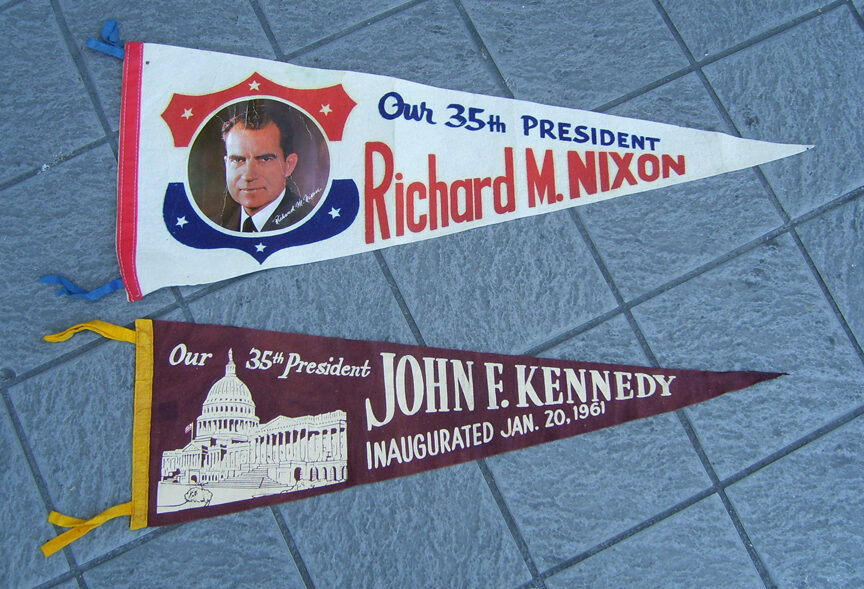 The 1960 U.S. Presidential Election was extremely close. NIXON was EISENHOWER’S V.P. for 8 years. KENNEDY was a senator from Massachusetts. During their DEBATES, KENNEDY returning from vacation, was tan and relaxed. NIXON recovering from a knee injury looked harried & sweat profusely. Rumor is KENNEDY won the TELEVISION VOTE. NIXON fared better on the RADIO..

At 43 years old, JOHN F. KENNEDY was elected the Youngest President of the United States. NIXON won more states but KENNEDY won the electoral votes. of 68 Million votes JOHN F. KENNEDY won by just 100,000 votes.  the election was so close, evidently both  men had PENNANTS manufactured DECLARING THEM THE 35th PRESIDENT OF THE UNITED STATES.. NIXON’S AIDES claimed they destroyed ALL OF THEM. Years later RICHARD NIXON would be elected PRESIDENT & IMPEACHED  for LYING. I’m able to offer you the VINTAGE PAIR as The 35th PRESIDENTS of the U.S PENNANTS.  NIXON’S PEOPLE must have lied about destroying this one. Frame & put them out together. It’s vintage political  eye candy time. great as a CORPORATE GIFT of pamper yourself.