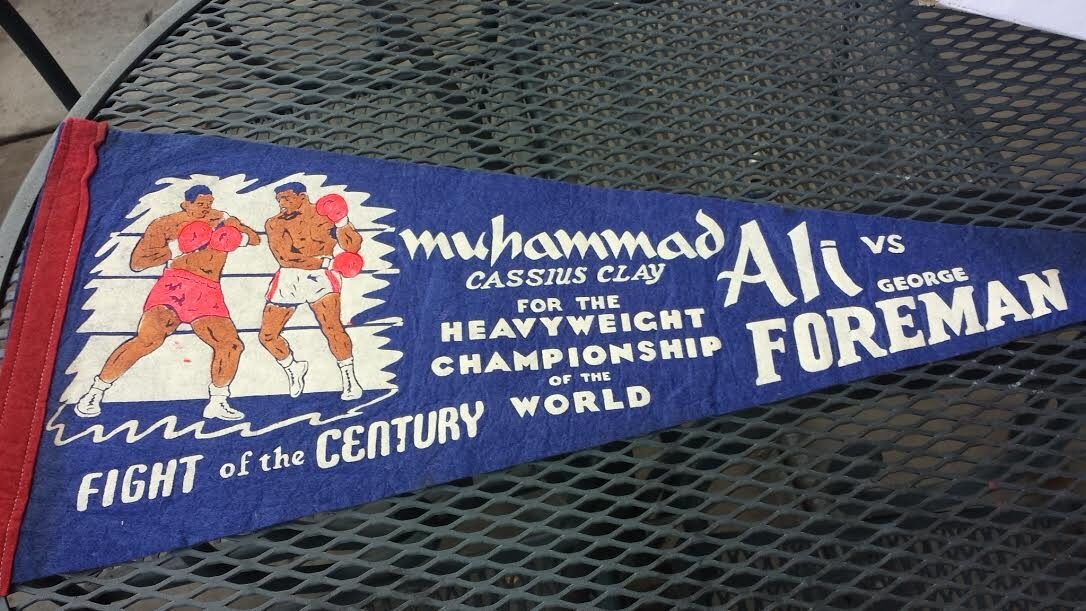 Muhammad Ali vs. George Foreman Rumble in the Jungle 1974 Pennant

In 1974, 32 year old Muhammad Ali, fought 25 year old Champion, George Foreman, for his Heavyweight Crown. The Bout took place in Zaire, Africa. It was forever known, as “The Rumble in the Jungle.” On March 8, 1971 , Ali lost a unanimous decision, to Champion Joe Frazier. Both fighters entered the ring undefeated. This Bout was known as, “The Fight of the Century.” Foreman, ultimately won Frazier’s crown, in a 2 round Tko.

Foreman had battered, both Frazier & Ken Norton, in 2 round Tkos ! These were, the only boxers to beat Ali. As a result, George Foreman, was a 7-1 favorite, to demolish Muhammad Ali as well. Muhammad was famed for his speed and technical skills, while George’s raw power, was his greatest strength. To eliminate, fighting at close range, which favored Foreman, in the 2nd round Ali changed tactics.

Ali frequently, began to lean against the ropes and cover up, letting Foreman punch his arms and body. ( A strategy Ali, later dubbed “The Rope-A-Dope.”) As a result, Foreman spent his energy throwing punches, that either missed or were deflected by Ali. Muhammad took every opportunity, to hit George’s face, with short straight punches, which left Foreman’s face swollen. Then Ali would retreat, to using the ropes. He taunted George, to throw more punches. After several rounds, Foreman began to tire. His face was damaged, by Ali’s hard fast jabs and crosses. Although he dominated the 5th round, it was obvious, the Champion was beginning to tire.

After a 7th round, hard punch to his jaw, Ali whispered to George. “Is that all you’ve got !!” By the 8th round, Foreman’s punching and defense, became ineffective. The result, of throwing so many wild punches, took it’s toll. Ali pounced on the champion, landing several right hooks, to his head. This was followed by a 5 punch combination, and a hard right to Foreman’s head. This had him dropping to the canvas. He rose as the count reached 9, but the referee, ended the fight !! Muhammad Ali’s K.O. of George Foreman, was herald, as one of the greatest fights of all time !!

As Muhammad Ali left the ring, he screamed, to the stadium throng, and an audience, watching the fight in theaters, around the world. “I Am the Greatest of All Time.” Finally, Everyone Agreed. A Documentary, of this Heavyweight Championship Fight was made. It was called, “When We Were Kings,” and won An Academy Award.

This was the 2nd time, Ali won the Heavyweight Championship. As a result, Muhammad Ali became the most loved athlete on Earth. He was also, the most recognized figure, in the world. The people’s champion, would be celebrated forever.

My Forever Treasures is thrilled, to offer this rare Ali vs. Foreman, 1974 Heavyweight Championship Souvenir Pennant. It’s a “Greatest of All Time Treasure.” 28″ x 12″ ~ Muhammad said, “After me, there will never be another.” On your wall, a wonderful way, to remember “The Champ.” I Love Him.