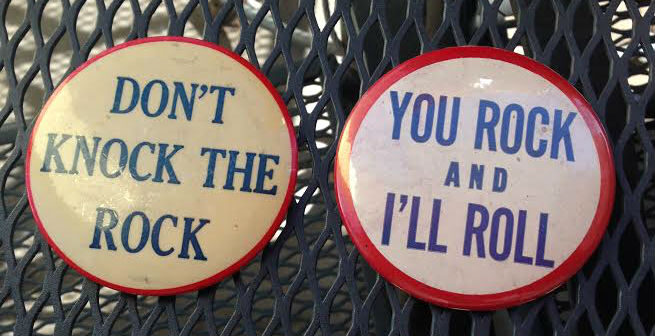 In Dec. 1956, the premiere  of the film “Don’t Knock The Rock” took place. This was the follow-up to the very successful, Bill Halley and the Comets film “Rock Around the Clock. ”

A disc jockey in this 1956 music film, presents a rock concert.  He wants to  show parents, rock and roll music, won’t turn their children into juvenile delinquents. Haley and the Comets,  and other hit makers are part of the stage show.

“Don’t Knock The Rock” is highlighted by Little Richard’s debut performance of “Tutti Fruitti” and “Long Tall Sally.”  Promotional Pinback,   “Don’t Knock the Rock” is taken from the film title.  “You Rock and I’ll Roll” is a phrase heard from fans of the music. Both are large 3.5.” and extremely rare, especially early rock and roll treasures.

For the collector of vintage, museum quality rock memorabilia. Bill Gates has us on speed dial. $2,500 each, + shipping. These 2 pinbacks belong in a rock and roll museum, or a safety deposit box.  Enjoy.