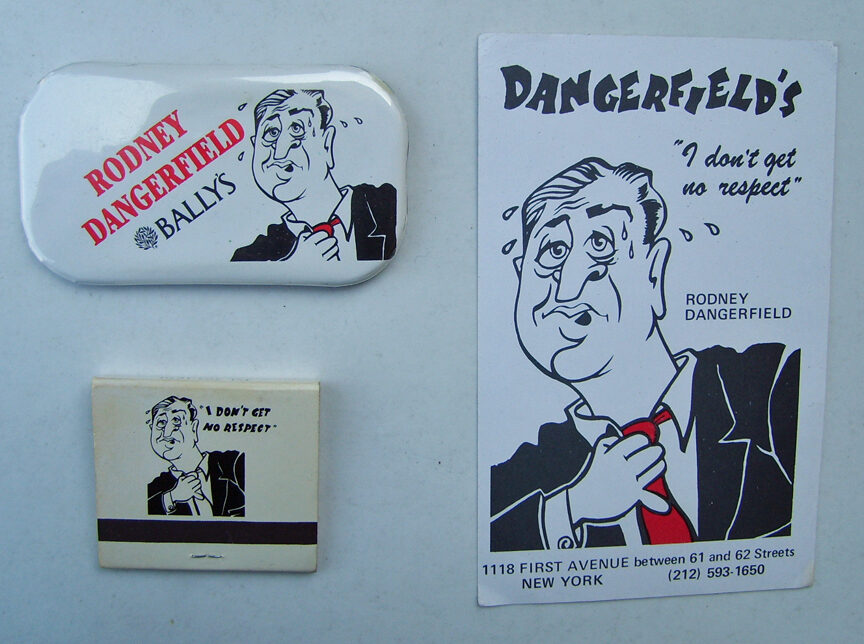 Rodney Dangerfield was an American comedian, writer, movie, television, stage, and radio voice actor. He was known for his catch-phrase “I don’t get no respect.” Rodney was the bug-eyed comic whose self-deprecating one-liners brought him stardom in clubs, television and movies. He was a professional joke teller not a guy looking for psychoanalysis from a night club audience. So you got jokes & gags. Many are among comedy’s best. Rodney, “I don’t get no respect.” “My wife likes to talk to me during sex.” “Last night she called me from a motel.” R.D.”What a doctor I’ve got.” I said “Doc I broke my arm in 2 places.” He told me “keep out of those places.”

Rodney was a major star at top entertainment venues. His Las Vegas act was a definitive comic event. He set fear on parade and all its consequences. Rodney, “Women show me no respect.” “A belly dancer said I turned her stomach.” Johnny Carson said “Quite simply no one was funnier doing stand up comedy than Rodney Dangerfield.” Jay Leno said “Dangerfield was simply the greatest.” Howard Stern said “Rodney was incredible.” “His stand-up was spectacular.” “His command of the stage was unequaled.” “His films, “Caddyshack” “Easy Money” and “Back to School” were game changers.”

In 1969 Rodney and a long time friend built “Dangerfield’s Comedy Club” in N.Y.C. so he could perform on a regular basis without endless travel. It’s success has continued almost 50 years later. Rodney offered his stage to Jim Carrey, Tim Allen, Roseanne, Jerry Seinfeld and so many others. My Forever Treasures offers our “Dangerfield’s Comedy Club” classic souvenir Postcard and Matchbook. Rodney’s caricature included. He’s had 22 movie roles, made 70 Johnny Carson appearances,and shined in 20 Lite Beer Commercials. His favorite activity was smoking weed.