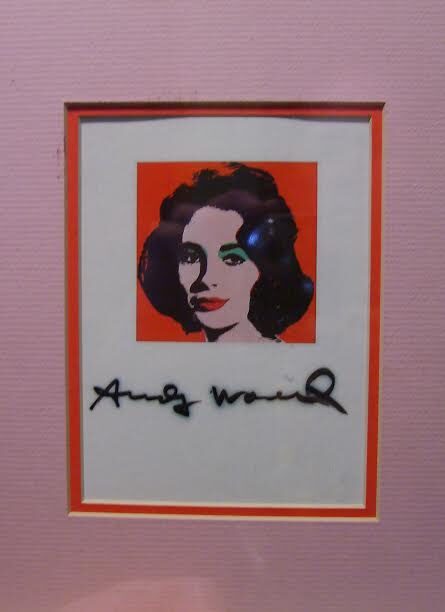 From his art book, is  a  mounted image of  LIZ  1964  autographed by Andy Warhol. Warhol started as a commercial illustrator. He ultimately became a museum artist by pioneering POP ART. ANDY WARHOL is one of the most influential, creative and prolific artists of the 20th century.. He invented the silkscreen process to enable him to mass produce his art.. His distinct style  can be found  in multiple CAMPBELL’S SOUP CANS,, DOLLAR BILLS, ,SUNSETS,  The BANANA on the Velvet Underground Album Cover, and endless  CELEBRITIES.. His art offers broad stokes and sexuality to objects and   familiar images. His unique style, offered  ANDY WARHOL the luxury of  being able to BRAND HIMSELF. The original silkscreen of LIZ 1964. is worth more than  20 million dollars. From his artbook, this mounted image of  LIZ  is autographed by ANDY WARHOL . Will have you waking up to LIZ in her prime !! Extremely desirable autograph. We keep this in the EYE CANDY section of the site.
Share this:
3976
0