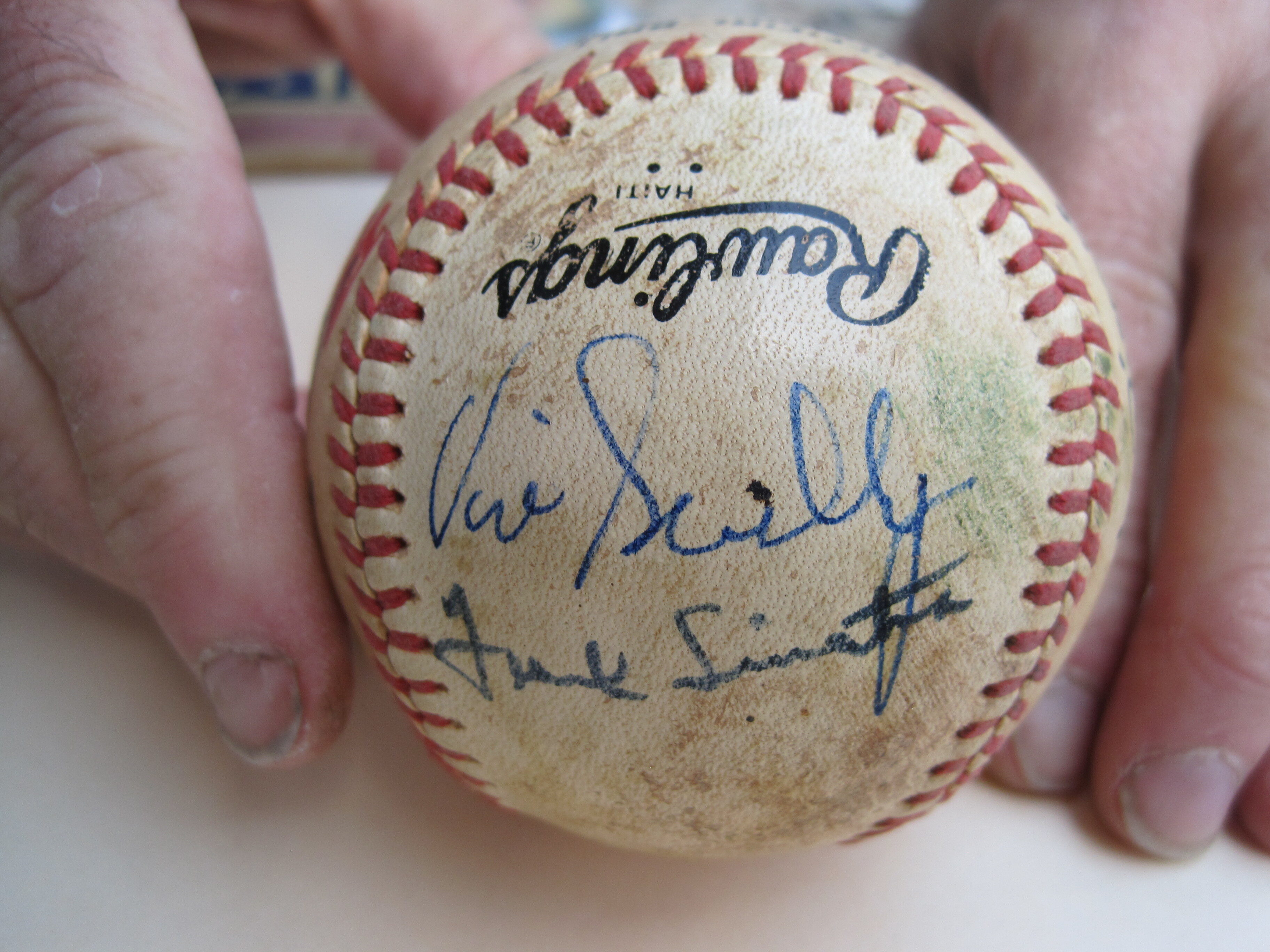 MLB BASEBALL AUOGRAPHED BY FRANK SINATRA & VIN SCULLY/FRANK SINATRA is considered the GREATEST INTERNATIONAL  ENTERTAINER of the 20th CENTURY. He’s sold 250 MILLION  RECORDS. RECEIVED 11 GRAMMY AWARDS for a career that succeeded in every era from BIG BANDS in the 1940ls to  DUETS  1 & 2, his successful 1990’s collaboration with ARETHA  FRANKLIN, TONY BENNETT, BONO, BARBRA STREISAND & a host of icons. SINATRA‘S CATALOGUE OF HITS is the most extensive  in recording history. From the MOVIES “ALL THE WAY” “YOUNG AT HEART” & “NEW YORK NEW YORK” just to start. from  BROADWAY ~ “HELLO YOUNG LOVERS” “SEND IN THE CLOWNS” & “FROM THIS MOMENT ON” to name a few. SIGNITURE HITS such as “MY WAY” ‘STRANGERS IN THE NIGHT” & “HELLO YOUNG LOVERS”  are just a few. Received an EMMY AWARD for his television special “A MAN & HIS MUSIC. He was awarded an ACADEMAWARD for BEST SUPPORTING ACTOR in “FROM HERE TO ETERNITY.”  WHEN it comes to AMERICA’S GREATEST ENTERTAINER, FRANK SINATRA will always be remembered as THE CHAIRMAN of the BOARD. His is among the most desireable  signitures, this baseball was also signed by 7 BASEBALL legends + VIN SCULLY DODGER’S HALL OF FAME BROADCASTER since 1950 when they played in BROOKLYN, to 2014 in LOS ANGELES. 64 SEASONS. SCULLY’S is the longest tenure of any BROADCASTER with a single team in PROFESSIONAL SPORTS HISTORY. His classic knowledgeable style always shines. He , begins each game with his signature  “IT’S TIME FOR DODGER BASEBALL.”

( Sinatra &  the Hall of Famers.) Everyone signed it. When FRANK SINATRA came to the owner’s box. I showed him the autographed baseball. FRANK looked and said “Good for you, there are a lot of the greats on this baseball.” . I said ” It’s not signed by the greatest.”  He said “Who  ?” I said   “You’re the greatest . It’s missing your signature. He smiled, took the ball and said, “My pleasure  !!” I watched FRANK SINATRA sign this baseball. I thanked him and have never completely recovered.  It remains my favorite moment.